McCain to Pick VP This Week: Romney or Jindal? Bob Novak is reporting that John McCain is planning to announce his vice presidential choice this week, presumably in an attempt to grab the press spotlight back while Barack Obama is being feted overseas. He notes that “Mitt Romney has led the speculation recently.”

Meanwhile, Chris Cillizza says “McCain will huddle with vice presidential aspirant Bobby Jindal during a trip to New Orleans later this week” which suggests that Jindal “is under serious consideration.”

Both men would be popular with conservatives (although I still haven’t figured out why, exactly, that’s the case with the more-moderate-than-McCain Romney) and have qualities that would help the ticket with moderates. They both have their drawbacks, too.

Romney’s got significant executive experience, is reasonably charismatic, and shores McCain up nicely on the economic front. There is the ever present “Mormon question,” but that’s likely a much lesser problem for the number two spot. The biggest obstacle here is that the two men seem not to like each other very much and there are plenty of sound bytes from their campaign against each other that could be played in the Fall.

Jindal is, as Joseph Lawler puts it, “the Right’s version of Barack Obama: young, a minority, articulate, and appealing. Only, Obama doesn’t have Jindal’s long list of accomplishments.” He helped revamp Medicare as a 24-year-old and turned around Louisiana’s university system before he turned 30. On the other hand, his belief in things like exorcism might not play so well outside that state. Morever, as I’ve argued previously and Cillizza reiterates, Jindal’s “foreign policy resume is at least as thin as Obama’s,” undercutting McCain’s chief argument.

Romney would be the much more conventional choice while Jindal would be more exciting. 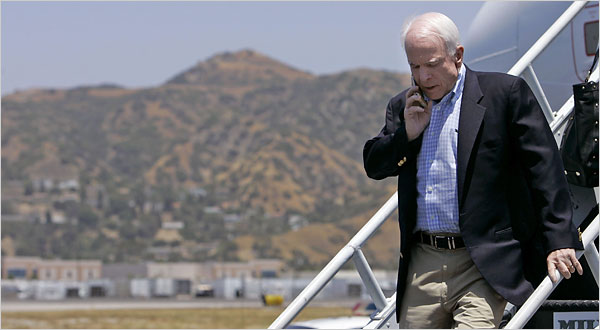