The Conservative Wahoo makes an interesting point: “Are There No Live People Worthy of the Medal of Honor?”

News yesterday of the upcoming posthumous award of the Medal of Honor to SFC Jared Monti, USA for conspicuous gallantry in Afghanistan. I am humbled and awed any time I read of the bravery and selflessness of those who earn this most sacred of honors, and my debt as an American to SFC Monti is incalculable.

That said, I wonder why it is that this country has been at war for nearing eight years and to my knowledge, not a single live person has been awarded the Congressional Medal of Honor for action in Afghanistan or Iraq. Yes, I know that the standards are high, and that is where I want them to be.

But I would surely like to see the President draping that Medal over the head of a living, breathing hero. I hope that we haven’t reached the point where one must give his or her life for the MOH.

Looking at the list of Medal of Honor recipients, it certainly seems that we have.   We’ve awarded two for action in Afghanistan (Navy LT Michael P. Murphy and Army SFC Monti) and four for Iraq (Army SFC Paul R. Smith, Marine Cpl Jason Dunham, Navy MA2 Michael Monsoor, and Army SPC Ross McGinnis).  All died as a result of their heroism.   Similarly, the two men awarded the Medal for the Battle of Mogadishu (Army MSG Gary Gordon and SFC Randy Shugart) died in action.

No one has earned a earned a Medal of Honor and lived to tell the story since the Vietnam War.

Clearly, it’s both harder than ever to get recognized with the Medal of Honor and harder still to do so and live to see it.

Correction: The original version said there had been no MOH action by a living awardee since the Liberty incident, for which CMDR William L. McGonagle was recognized. That’s not true. I was looking at a list arranged by conflict and, of course, Vietnam started before but continued after 1967. 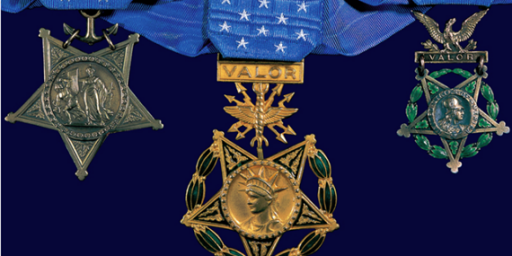