I was rather surprised at the uproar in some corners of the blogosphere following the publication in Izvestiya of an interview with Nikolai Patrushev, the secretary of the Kremlin’s security council. In the interview Mr. Patrushev mentioned a new doctrine regarding the Russian Federation’s use of nuclear weapons (hat tip: Nathan Hodge). Meteor Blades notes that the old Soviet Union had renounced nuclear first strikes during the Cold War. He continues:

Current Russian doctrine says nuclear weapons can only be used in response to a nuclear attack or large-scale war against Russia.

In the document of November 1993, alongside pledges of allegiance to international law and disarmament agreements, the substantive part had a number of peculiar points. The main points were: an emphasis on rapid deployment of interventionist forces, to be used on post-Soviet territory; a renewal of the traditional accent on offensive conventional operations; legalization of stationing Russian forces abroad (in the CIS) and – what was most striking – of their potential employment in domestic situations. Not a single word mentioned civilian or Parliamentary control over the armed forces and military policy (the President is the sole chief), military reform, or further reductions of force levels(2).

The nuclear part included several notable innovations. First, the document states unequivocally: “The goal of Russian Federation policy regarding nuclear weapons is to remove the threat of nuclear war by deterring its initiation against the Russian Federation and its allies.”(3) After several years of utopian concepts about substituting deterrence with something different, this was a positive and realistic point, clearing the issue and theoretically allowing a focus on real problems without confusion or wishful thinking. Nonetheless, the concrete formula of deterrence was much more dubious and controversial.

Third, there was more confusion, because from the text of the PGMD it did not follow whether this highly permissive formula meant first use/strike or second/retaliatory strike. However, further elaborations from the highest officials of the Ministry of Defense and Security Council made it clear that it was exactly a first strike (not first use), that was the subject of this doctrinal part.(4)

The emphasis is mine. I haven’t sat down and made a checklist but it doesn’t appear to me that very many countries actually qualify as exempt from nuclear first strike under that doctrine.

Just how this new doctrine differs from the old doctrine isn’t completely clear to me, either. It may never be clear or we may see some clarifications emerge which will help us make a determination. At the very least Mr. Patrushev’s comment would appear to be a caution to Georgia or other former Soviet republics not to get too cozy with the United States or its allies. 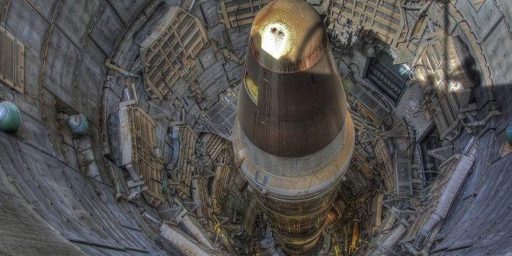