A surprise announcement about the First Lady. 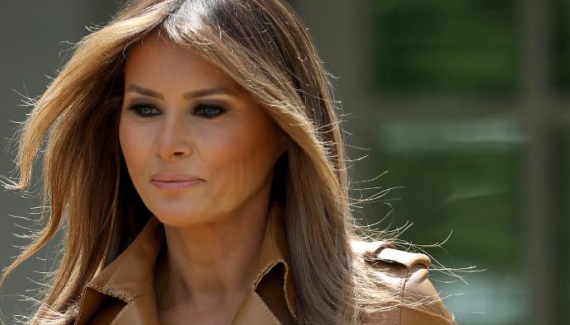 First Lady Melania Trump has undergone surgery at Walter Reed Hospital in Washington D.C. for an as-yet-unspecified kidney condition that her spokesperson is calling “benign”:

Trump had been experiencing an issue with her kidney that her office described as benign but requiring medical attention.

Trump, who turned 48 last month, entered Walter Reed in nearby Bethesda, Maryland, on Monday morning and is expected to remain hospitalized for several days following the operation, according to the statement from her communications director, Stephanie Grisham.

She is the first US first lady to undergo such a serious medical procedure while in the White House since Nancy Reagan had a mastectomy in October 1987. Rosalynn Carter underwent surgery to remove a benign lump from her breast in April 1977. Weeks after Betty Ford became first lady, she was diagnosed with breast cancer and underwent a mastectomy in September 1974.

Melania Trump is recovering in the hospital after undergoing a medical procedure to treat a kidney condition, according to the White House.

The 48-year-old first lady “underwent an embolization procedure to treat a benign kidney condition” on Monday, a statement from her office said.

“The procedure was successful and there were no complications,” the White House said.

Trump, a former model, will likely remain at Walter Reed National Military Medical Center outside of Washington for the rest of the week, according to the White House.

“The First Lady looks forward to a full recovery so she can continue her work on behalf of children everywhere,” according to the statement.

The procedure comes a week after Trump launched her official platform, dubbed “Be Best” — an awareness campaign focused on children’s well-being, social media use and opioid abuse.

CNN’s Dr. Sanjay Gupta said Monday that while it was “unclear exactly what [Trump] had done, an embolization procedure is typically done for cancer — although it’s very clear in this statement that this was a benign condition.”

“That’s how they’ve framed it,” Gupta said of the statement from Trump’s communications director, “So it doesn’t sound like it’s any type of cancer.”

“Sometimes thyroids, or cysts, or something like that can be treated as well,” Gupta said.

Here’s the statement issued by the White House:

This morning, First Lady Melania Trump underwent an embolization procedure to treat a benign kidney condition.  The procedure was successful and there were no complications.  Mrs. Trump is at Walter Reed National Military Medical Center and will likely remain there for the duration of the week.  The First Lady looks forward to a full recovery so she can continue her work on behalf of children everywhere.

Remarkably given the current White House environment, the news of Mrs. Trump’s surgery was not made public until a statement was released from the First Lady’s office in the East Wing of the White House. That statement, which I quote above, is relatively undetailed in describing what necessitated the surgery or why recovery is expected to take so long, but one presumes that this was more than just minor outpatient surgery.

President Trump was apparently not present for the surgery but has been working at the White House, but he is expected to visit the hospital later this afternoon. The absence isn’t entirely surprising given both the First Lady’s own preference for privacy and the fact that the President traveling means bringing along an entire security entourage as well as at least some segment of the White House Press Pool that ordinarily travels with the President. The last time a First Lady underwent a medical procedure was when Laura Bush had a minor procedure that took place while President George W. Bush was on a diplomatic trip to Australia. Before that, as noted, the last time a First Lady underwent serious surgery was when Nancy Reagan had a mastectomy in 1987.

The announcement did come as something of a surprise since Mrs. Trump has seemed to be physically fine in her most recent public appearances, which have included a State Visit by French President Emmanuel Macron and his wife and her announcement last week of an initiative aimed at combating bullying. Additionally, her relatively young age is a count in her favor as is the fact that she’ll have access to some of the best medical care in the country. Perhaps she’ll even be able to return to the White House earlier than expected. In any case, here is hoping for a quick recovery for the First Lady and best wishes to her family, most especially her son Barron Trump.