In a stunning reversal of policy, DOD is allowing soldiers to march in a gay pride parade in uniform. 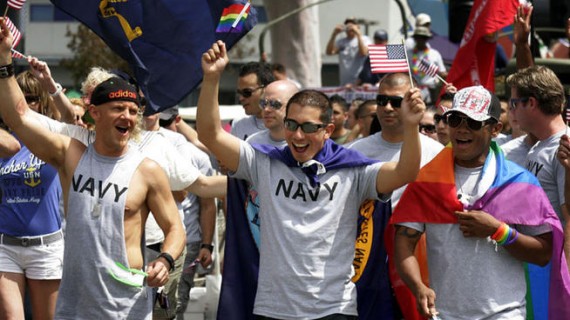 In a stunning reversal of policy, DOD is allowing soldiers to march in a gay pride parade in uniform.

The US military will for the first time allow its members to wear uniform at a gay pride march.

The permission was granted for the Gay Pride Parade in San Diego, California, on Saturday, a military-wide Pentagon directive said.

The memo said the move was a one-off exception for this year’s march only.

It comes after a longstanding ban on openly gay people serving in the US military – known as “don’t ask, don’t tell” – was ended last year.

“Based on our current knowledge of the event and current policies, we hereby are granting approval for service members in uniform to participate in this year’s parade,” Deputy Assistant Secretary of Defence Rene Bardorf said in the directive.

Permission was given on condition that military personnel take part in a personal capacity only and adhere to the US military’s standards on uniform wear, he added.

Now, this strikes me as bizarre because it’s at furtherance with longstanding DOD policies having nothing to do with gays in the military, Don’t Ask Don’t Tell, or related controversies. DoD Directive 1334.1, “Wearing of the Uniform,” as amended, provides:

3.1. The wearing of the uniform by members of the Armed Forces (including retired members and members of Reserve components) is prohibited under any of the following circumstances:
3.1.1. At any meeting or demonstration that is a function of, or sponsored by an organization, association, movement, group, or combination of persons that the Attorney General of the United States has designated, under E.O. 10450 as amended (reference (b)), as totalitarian, fascist, communist, or subversive, or as having adopted a policy of advocating or approving the commission of acts of force or violence to deny others their rights under The Constitution of the United States, or as seeking to alter the form of Government of the United States by unconstitutional means.
3.1.2. During or in connection with the furtherance of political activities, private employment or commercial interests, when an inference of official sponsorship for the activity or interest may be drawn.
3.1.3. Except when authorized by competent Service authority, when participating in activities such as public speeches, interviews, picket lines, marches, rallies or any public demonstration (including those pertaining to civil rights), which may imply Service sanction of the cause for which the demonstration or activity is conducted.
3.1.4. When wearing of the uniform would tend to bring discredit upon the Armed Forces.
3.1.5. When specifically prohibited by regulations of the Department concerned.

Emphasis mine. How in the world does this not constitute a political activity, march, rally, or public demonstration?  It’s all of the above.

How is this different from Dave Willoughby, a former Marine corporal, wearing his uniform at a Tea Party rally a decade after his departure from the service? Or Lt. Gordon J. Klingenschmitt, a Navy chaplain, wearing his uniform to a White House protest against a policy requiring only non-denominational prayer? (Granted, he specifically disobeyed a direct order not to do so.)

To be sure, a gay rights parade is theoretically non-partisan. But it’s simply understood that troops can not demonstrate for any cause while wearing their uniforms. And a gay rights rally is devoted to a cause.

“Today is a great day of Pride! San Diego Pride is honored to have the privilege of celebrating our country and our servicemembers with dignity and respect,” said San Diego LGBT Pride Executive Director Dwayne Crenshaw in a statement. ”The fight for equality is not over and it is not easy, but this is a giant leap in the right direction.”

UPDATE: Yes, I realize that the Pentagon’s ruling constitutes the participation being “authorized by competent Service authority.” What I’m asking is Why this parade and not other events. Commenters have made comparisons with the Macy’s parade or even the St. Patrick’s Day parade. I don’t think they’re equivalent. Rather, gay pride parades are more akin to the black  freedom marches of the 1960s. Indeed, the organizer says so.