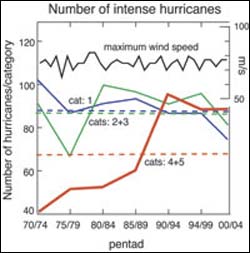 There is a new study that has noted that the number of catagory 4 and 5 hurricanes have increased. During the 1970’s there were on average 10 catagory 4 and 5 hurricanes globally. In the 1990’s that number has gone to 18 per year globally. But what is interesting is that this article has the title, Hurricanes are getting stronger, study says whereas the Houston Chronicle has the title Study links global warming to stronger storms. Pretty significant differences in my opinion. Especially when we contrast the final paragraphs of the Inovations Report article,

“But we donÃ¢€™t know a lot about how evaporation from the oceansÃ¢€™ surface works when the winds get up to around 100 miles per hour, as they do in hurricanes,” said Webster, who adds that this physical understanding will be crucial to connecting trends in hurricane intensity to overall climate change.

“If we can understand why the world sees about 85 named storms a year and not, for example, 200 or 25, then we might be able to say that what weÃ¢€™re seeing is consistent with what weÃ¢€™d expect in a global warming scenario. Without this understanding, a forecast of the number and intensity of tropical storms in a future warmer world would be merely statistical extrapolation.”

Further, we must remember that quite a bit of the global warming is going to take place in the comming decades. The idea that future warming is influencing current hurricanes is…well…stupid. The Houston Chronicle article does not this (to the author’s credit),

But it also does not have the quote by Webster suggesting that quite a bit more needs to be understood before making connections between hurricane intensity and global warming can be made. Also the warning about needing a longer time frame for the data as well. For example, this article notes that hurricanes run in a 20 to 30 year cycle. I haven’t a clue what periodicity is for hurricanes and if the time periods in this recent study correspond to this cycle or not, but it something to keep in mind.

Update: The Long Beach Press Telegram has perhaps the most hysterical headline, Katrina due to global warming?.