Yet another officer charged with heading up a sexual harassment prevention program has been arrested:

FORT CAMPBELL, Ky. — Army officials say the manager of the sexual assault response program at Fort Campbell has been arrested in a domestic dispute and relieved of his post.

Lt. Col. Darin Haas turned himself in to police late Wednesday on charges of violating an order of protection and stalking. A spokesman for the post on the Tennessee-Kentucky line say Haas was immediately removed as manager of a program meant to prevent sexual harassment and assault and encourage equal opportunity.

This came on the same day that President Obama issued a rather strong statement on the issue of sexual assaults in the military:

Sexual assault in the military is “dangerous to our national security,” President Barack Obama declared Thursday as he huddled with his top military leaders at the White House to find a way to put an end to the problem.

Obama said all of the military leaders at the table had expressed to him “that they’re ashamed by some of what’s happened.”

“The reason we are so good is not because of fancy equipment, it’s not because of our incredible weapons systems and technology, it’s because of our people,” he said. “It comes down to, do people trust each other and do they understand that they’re all part of a single system that has to operate under whatever circumstances effectively? The issue of sexual assault in our armed forces undermines that trust.”

Sexual assault in the military “is dangerous to our national security” and is “not a sideshow,” he said. “This goes to the heart and the core of who we are and how effective we’re going to be.”

There’s also action pending in Congress aimed at dealing with this problem, including legislation that would change the manner in which these cases are reported in order to remove the requirement that victims report these cases to commanding officers. What’s clear to me, though, is that there needs to be a crackdown on the discipline handed out in these sorts of cases so that the message is sent that there is a zero-tolerance policy. 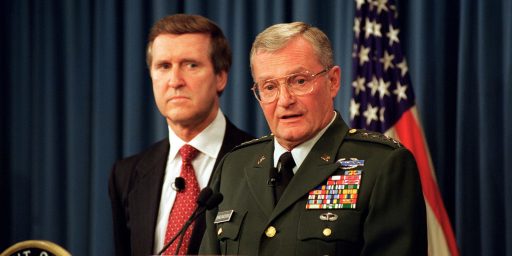