The skies over Southern California were lit up last night by a mysterious missile test: (video above)

A mysterious missile launch off the southern California coast was caught by CBS affiliate KCBS’s cameras Monday night, and officials are staying tight-lipped over the nature of the projectile.

CBS station KFMB put in calls to the Navy and Air Force Monday night about the striking launch off the coast of Los Angeles, which was easily visible from the coast, but the military has said nothing about the launch.

KFMB showed video of the apparent missile to former U.S. Ambassador to NATO Robert Ellsworth, who is also a former Deputy Secretary of Defense, to get his thoughts.

Magnificent images were captured by the KCBS news helicopter in L.A. around sunset Monday evening. The location of the missile was about 35 miles out to sea, west of L.A. and north of Catalina Island.

A Navy spokesperson told KFMB it wasn’t their missile. He said there was no Navy activity reported in the area Monday evening.

However, Barrett Brown at The League Of Ordinary Gentlemen draws attention to a post at Reddit that passes along an air traffic control warning that was issued yesterday:

So, pilots were warned to stay away from an area off the California coast around the time that the missile was seen, and the warning refers to the “Naval Air Warfare Center Weapons Division.”

Logical conclusion? A U.S. military test of some kind, although why they’re being so secret about it is unclear.

Update: As some have noted in the comments, the time stamp on the NOTAM makes it unclear if it has anything to do with last night’s events, but there’s an alternative theory, contrails: 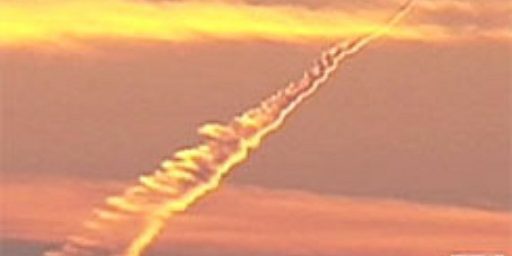 “Mystery Missile Launch” Was Most Likely A Jet Contrail