National Republicans are reportedly abandoning Joe Miller's Senate campaign at the last minute out of fear that only Lisa Murkowski can stop Alaska's Senate seat from falling into Democratic hands. That could have a serious impact down the road for relations between inside-the-beltway Republicans and the Tea Party. 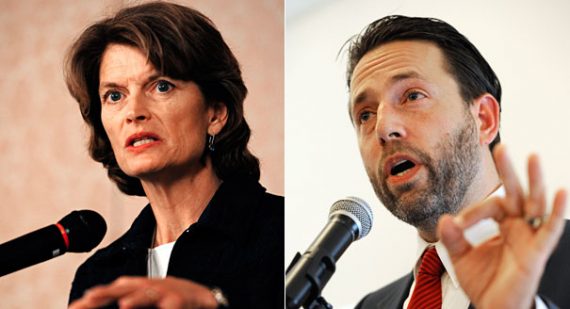 ABC News report Jon Karl reports this morning that Republican insiders are bailing on Joe Miller’s campaign for the Senate in Alaska at the last minute:

A high-level GOP source tells me that party leaders have essentially given up on Republican Senate candidate Joe Miller and are now banking on a victory by write-in candidate Lisa Murkowski as the best bet for Republicans to keep the Alaska Senate seat.

Murkowski defied party leaders by running a write-in campaign after she lost the Republican primary last month. But with Miller’s campaign faltering, the source tells me that Republican leaders are now worried that Democrat Scott McAdams has a shot of winning and that Murkowski may be the only way to stop him.

It’s a remarkable turnaround for Murkowski. She was punished by party leaders last month — unceremoniously stripped of her position as ranking member of the Energy and Natural Resources Committee and her role in Senate leadership — when she refused to bow out of the Senate race and endorse Miller. But she has consistently said she is still a Republican and will caucus with the Republican party if she wins.

The nightmare scenario for Republicans is that McAdams comes in second on Election Day, trailing “write-in candidate.” Those write-in votes won’t be counted unless there are more write-in votes than there are votes for any candidate on the ballot. Once the write-in votes are counted, however, some of them will inevitably be disqualified (illegible writing, wrong name, etc.). And a small number will be for candidates other than Murkowski. If enough are tossed out, second place McAdams would be the winner

Karl points to this ad from the NRSC as evidence that national Republicans are more concerned with stopping McAdams than boosting Miller:

As Karl notes, the ad principally attacks McAdams, doesn’t mention Murkowski at all, and only mentions Miller at the very end.

None of this is really surprising.

For one thing, Miller has had a bad two weeks thanks mostly to public relations mis-steps of his own, or his campaigns’, making and he has seemed to slip in the polls, while Murkowski has been holding her own. One poll, by Republican pollster Dittman Research, even has Murkowski leading Miller by ten points. The problem, of course, is that polling a write-in candidacy is inherently problematic so there’s no way of knowing how strong Murkowski’s support really is until you start counting the votes. That’s why the NRSC’s fear of a come-out-of-nowhere win by McAdams isn’t at all unrealistic; Miller and Murkowski could end up dividing the Republican leaning vote sufficiently that it would be enough for McAdams to win in a three-way race.

For another, Murkowski is a known quantity to Republicans in Washington. She’s already said that if she wins, she will caucus with the Senate GOP, and, despite the choruses of “RINO !” coming from Miller supporters, she has been a reliable GOP vote during her time in office. As the saying goes, better the devil you know than the one you don’t and, from the GOP perspective, better an imperfect Republican than a second Democratic Senator from Alaska.

Regardless of what happens on Tuesday, or whenever the votes get counted for good, this is only bound to increase the tension between Republicans in Washington and the grassroots “Tea Party” movement. If Miller wins, it’s already clear that he’s going to be part of the maverick “Tea Party” caucus that is likely to include people like Rand Paul, Pat Toomey, Marco Rubio, and Ron Johnston at the very least. If he loses, then his supporters will focus their anger on Republican insiders who they will blame for stabbing him in the back. Already, there are rumors that John Cornyn, the second-term Texan who heads the NRSC, will be subject to a primary challenge when he is up for re-election is 2014, for example. At the very least, a Miller loss would make the relationship between the national GOP and the Tea Party tense even while the two groups try to combine forces to run Congress, and set up for a Presidential campaign in 2012.