Ever since the story broke almost five months ago, it’s been inevitable that Richard Blumenthal’s opponent in the General Election would bring up his repeated record of lying about his military service during the Vietnam War. Yesterday, the Linda McMahon campaign dropped the gauntlet:

McMahon has more than enough money to make sure this ad gets played repeatedly on Connecticut television, the only question is what impact it will have on the race.

So far, while McMahon has managed to close the gap somewhat, Blumenthal still leads and recent polls seem to indicate that he’s puling away: 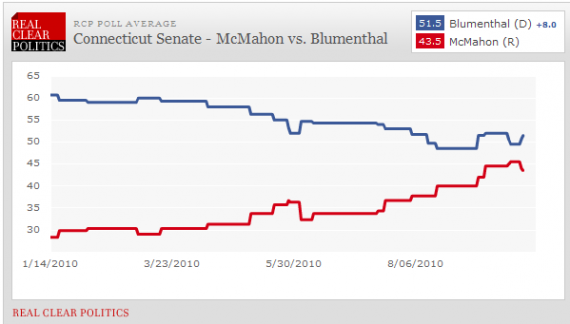 This race has been far more competitive than many thought it was going to be, but it’s still unclear if McMahon will be able win here.