NOT A MUSIC FAN?

Apparently, PoliBlogger does not appreciate the fine arts. He disses the political insights of the Beastie Boys and seems to think that the Dixie Chicks’ getting naked doesn’t help clarify their political positions. Personally, I don’t see how it could hurt. Except the chubby one. She should stay dressed. Or read Megan’s blog for diet tips.

Update (22:26) Upon further review, it appears the offending Chick has gone to the gym. She is now authorized to get naked to her heart’s content. OTB is not one to cause a chilling effect on free speech unless absolutely necessary. 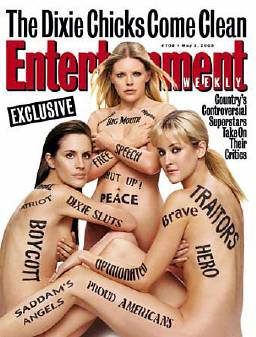 The Dixie Chicks pose nude on the cover of Entertainment Weekly magazine released on April 24, 2003. Emily Robison, Natalie Maines and Marti Seidel (L-R) said they posed nude in response to the controversy created by pro-war advocates over Maines’ remark at a concert in London on March 10 that they were ‘ashamed’ President Bush was from their home state of Texas.
(Entertainment Weekly via Reuters)
FILED UNDER: Best of OTB, Iraq War