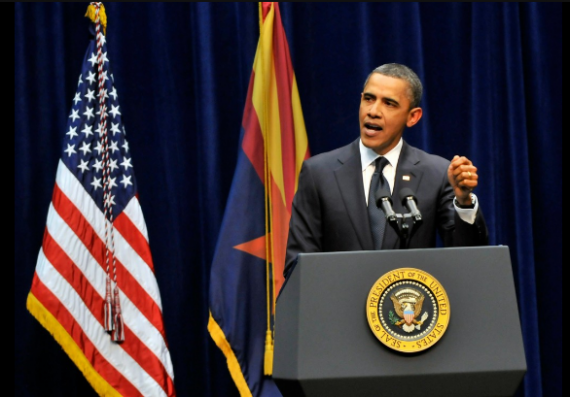 Last night President Obama spoke at the memorial service for the victims of the Arizona shootings, and managed to do so in a way that moved beyond the nonsensical politicization that we’ve seen over the past five days:

President Obama offered the nation’s condolences on Wednesday to the victims of the shootings here, calling on Americans to draw a lesson from the lives of the fallen and the actions of the heroes, and to usher in a new era of civility in their honor.

The president directly confronted the political debate that erupted after the rampage, urging people of all beliefs not to use the tragedy to turn on one another. He did not cast blame on Republicans or Democrats, but asked people to “sharpen our instincts for empathy.”

It was one of the more powerful addresses that Mr. Obama has delivered as president, harnessing the emotion generated by the shock and loss from Saturday’s shootings to urge Americans “to expand our moral imaginations, to listen to each other more carefully” and to “remind ourselves of all the ways that our hopes and dreams are bound together.”

“At a time when our discourse has become so sharply polarized, at a time when we are far too eager to lay the blame for all that ails the world at the feet of those who think differently than we do,” he said, “it’s important for us to pause for a moment and make sure that we are talking with each other in a way that heals, not a way that wounds.”

The president led an overflow crowd at the evening service at the University of Arizona in eulogizing the six people who died on Saturday and asking for prayers for the wounded, including Representative Gabrielle Giffords, who the authorities said was the target of an assassination attempt.

He warned against “simple explanations” and spoke of the unknowability of the thoughts that “lurked in the inner recesses of a violent man’s mind.” He suggested that the events should force individuals to look inward, but also that they should prompt a collective response against reflexive ideological and social conflict.

While the tone and content were distinctly nonpolitical, there were clear political ramifications to the speech, giving Mr. Obama a chance, for an evening at least, to try to occupy a space outside of partisanship or agenda.

“If this tragedy prompts reflection and debate, as it should, let’s make sure it’s worthy of those we have lost,” Mr. Obama said. “Let’s make sure it’s not on the usual plane of politics and point scoring and pettiness that drifts away with the next news cycle.”

There were parts of the memorial service itself that were, in some ways, jarring. It opened with a opening prayer from a Native American that many watching from outside Arizona probably found a little unusual, but which makes sense considering the long history of Native Americans in Arizona before it even was Arizona. There was cheering from the crowd which seemed odd for a memorial service, but it’s hard to put oneself in the shoes of a community that has been, in some sense, under siege since Saturday morning, and there is some value in catharsis. There were highlights, like the appearance of Daniel Hernandez, the young intern who ran through gunfire to help a Congresswoman he’d only been working for since a week ago today. But, the biggest highlight of  the evening was left for the President:

After touching down under blue skies and a bright desert sun, Obama paid a surprise visit to victims recovering at University Medical Center, including Rep. Gabrielle Giffords (D-Ariz.), who was shot in the head and remains in the intensive care unit.

A short time after the president left her room, Giffords, surrounded by her husband and three close friends from Congress – House Minority Leader Nancy Pelosi (D-Calif.), Rep. Debbie Wasserman Schultz (D-Fla.) and Sen. Kirsten Gillibrand (D-N.Y.) – opened her eyes and reached for her husband, showing a level of responsiveness that thrilled her loved ones.

“Gabby opened her eyes,” said Obama, who was told about the incident by Giffords’s husband during the short ride from the hospital to the arena. “And I can tell you she knows we are here, she knows we love her and she knows we are rooting for her”

You could not have scripted a better moment for a Hollywood movie, but it wasn’t the feel good moments that most people were paying attention to, it was the content of Obama’s speech. And there, I think, he hit it out of the park, as this excerpt from his prepared remarks demonstrate:

But at a time when our discourse has become so sharply polarized – at a time when we are far too eager to lay the blame for all that ails the world at the feet of those who think differently than we do – it’s important for us to pause for a moment and make sure that we are talking with each other in a way that heals, not a way that wounds.

Scripture tells us that there is evil in the world, and that terrible things happen for reasons that defy human understanding. In the words of Job, “when I looked for light, then came darkness.” Bad things happen, and we must guard against simple explanations in the aftermath.

For the truth is that none of us can know exactly what triggered this vicious attack. None of us can know with any certainty what might have stopped those shots from being fired, or what thoughts lurked in the inner recesses of a violent man’s mind.

So yes, we must examine all the facts behind this tragedy. We cannot and will not be passive in the face of such violence. We should be willing to challenge old assumptions in order to lessen the prospects of violence in the future.

But what we can’t do is use this tragedy as one more occasion to turn on one another. As we discuss these issues, let each of us do so with a good dose of humility. Rather than pointing fingers or assigning blame, let us use this occasion to expand our moral imaginations, to listen to each other more carefully, to sharpen our instincts for empathy, and remind ourselves of all the ways our hopes and dreams are bound together…

The loss of these wonderful people should make every one of us strive to be better in our private lives – to be better friends and neighbors, co-workers and parents. And if, as has been discussed in recent days, their deaths help usher in more civility in our public discourse, let’s remember that it is not because a simple lack of civility caused this tragedy [– it did not –] but rather because only a more civil and honest public discourse can help us face up to our challenges as a nation, in a way that would make them proud. It should be because we want to live up to the example of public servants like John Roll and Gabby Giffords, who knew first and foremost that we are all Americans, and that we can question each other’s ideas without questioning each other’s love of country, and that our task, working together, is to constantly widen the circle of our concern so that we bequeath the American dream to future generations.

There’s been much talk in the last five days about our civic discourse, and well as an underlying meta-discussion over whether it is even appropriate to talk about civic discourse in the wake of the shooting since it’s apparent that the only voices Jared Lee Loughner was listening to were the ones in his head. However, to the extent that such a discussion is appropriate and necessary (and I think it is regardless of the reasons that Loughner shot people), I think the President hit the right tone here. There’s vitriol and distrust and misplaced passion on both sides of the political aisle, and if this tragedy gives some of us the occasion to sit back and re-think how we treat our political adversaries, then maybe some good will come from it.

The overall reaction to the President’s speech seems to be overwhelmingly positive. Even the talking heads on Fox News Channel last night were positive. In The New York Times, Gail Collins says Obama hit a home run:

Maybe President Obama was saving the magic for a time when we really needed it.

We’ve been complaining for two years about the lack of music and passion in his big speeches. But if he’d moved the country when he was talking about health care or bailing out the auto industry, perhaps his words wouldn’t have been as powerful as they were when he was trying to lift the country up after the tragedy in Tucson.

“Our hearts are broken, and yet our hearts also have reason for fullness,” he said, in a call to action that finally moved the nation’s focus forward.

The days after the shootings had a depressing political rhythm. There was the call for civility, followed by the rapidly escalating rhetoric over whose fault the incivility was, which climbed ever upward until Wednesday when you had a congressman from Texas claiming that the F.B.I. was hiding information on the gunman’s political beliefs because the truth would embarrass the White House.

For me, Obama’s best moment came when he warned that “what we can’t do is use this tragedy as one more occasion to turn on one another.”

Despite the sour start to the day, our nation came a step closer to living up to those expectations tonight.

In the blogosphere, the reaction has also been largely positive. Charlie Martin at Pajamas Media, for example, found himself pleasantly surprised by the President:

Somehow, I don’t know if they had to go to a temp agency or what, the Obama people found a grownup to write the speech,  This one time, Obama managed to sound like he thought he was President, not of his constituency, but of everyone.

Speeches and leadership are not the same thing.

Obama delivered one tonight, but failed at the other over the past three days as Pima County Sheriff Dupnik, Democrat Party leaders, and media abettors poisoned the public square with the very vitriol the president now condemns.

Somehow, I think the reaction on the right as the day unfolds will be closer to Malkin’s cyncism than the Martin’s pleasant surprise. Once the Becks, Limbaugh’s and Hannity put their spin on the President’s word, the marching orders on the right will be to compare last night’s memorial service to the rather distasteful politicization that marked Paul Wellstone’s funeral a few years ago.

If that’s the tack they take, they’ll be wrong. Last night was the best speech of Barack Obama’s short Presidency. He said the right thing, at the right time, in the right place. The people who reject the sentiment he appealed to, whether on the left or the right, are only displaying their own cynicism and the dark core of their own souls.

In case you missed it, here is the full video of the President’s speech: