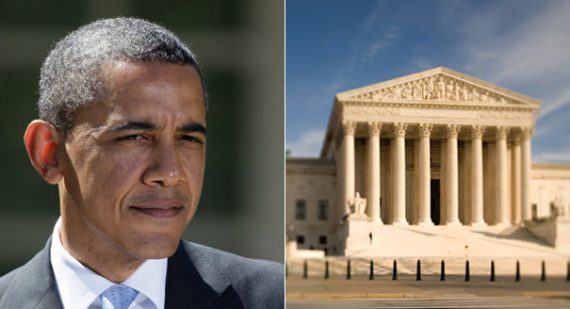 Not surprisingly, the President was quite pleased with the Supreme Court’s decision on his signature piece of domestic legislation:

(CNN) – President Barack Obama applauded the Supreme Court’s decision Thursday to uphold his controversial health care reform legislation, which has endured relentless debate since it was signed into law in 2010.

Speaking in the East Room of the White House, Obama said the ruling was “a victory for people all over this country whose lives will be more secure because of this law.”

In a 5-4 ruling, the high court decided the individual mandate requiring people to have health insurance is valid as a tax, even though it is impermissible under the Constitution’s commerce clause.

While Obama acknowledged the issue has been “divisive” in the years since he assumed office, he maintained his push for the law was not driven by politics.

Obama, for his part, took a swipe at his opponent in his address, pointing to Romney’s own health care law as former Massachusetts governor-a measure after which Democrats say the federal health care law was modeled, as it also included a mandate to buy insurance.

“Even though I knew it wouldn’t be politically popular, and resisted the idea when I ran for this office, we ultimately included a provision in the Affordable Care Act that people who can afford to buy health insurance should take the responsibility to do so,” Obama said. “In fact this idea has enjoyed support from members of both parties, including the current Republican nominee for president.”

This is likely the tack that the Obama Campaign will take with regard to the law quite forward. Without a doubt, they have received a tremendous psychological boost from this decision that will make them far more comfortable than they otherwise might have been to talk about what they consider the benefits of the PPACA. Republicans, meanwhile, are running on a pure “repeal” platform now and one wonders if they’re going to run into a problem if they don’t have an “and replace” to go along with it. After all, during the 2010 midterm campaigns, “repeal and replace” was a consistent GOP mantra despite the fact that, since they’ve been in power the House GOP has not really proposed any kind of replacement for the law. Will Romney be able to make it through the election without talking about alternatives? I’m going to guess that the Obama campaign is going to do their best to make sure that he won’t.