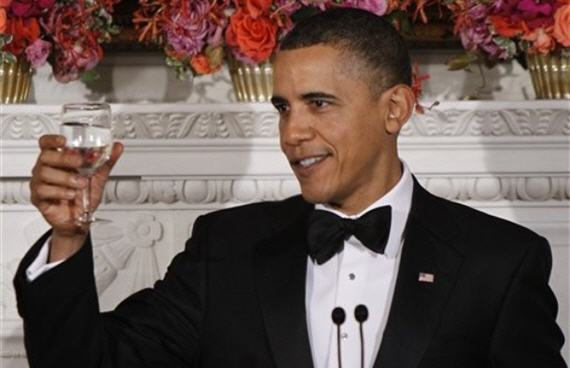 Yet another awkward moment on his trip to the UK.  Jake Tapper reports:

The president and the orchestra at Buckingham Palace this evening were a bit out of synch.

When the president toasted the Queen the orchestra misunderstood a pause and what seemed to be a cue from the president for “God Save the Queen” to begin playing.

“Ladies and gentlemen please stand with me and raise your glasses as I propose a toast,” the president said, putting down his note cards and grabbing his glass. “To her majesty the Queen.”

The president paused, the guests stood, and the orchestra prepared to play.

But the president wasn’t done speaking.

“The vitality -” the president said before the orchestra began.

Then the familiar tune – you might know it better as “My Country ‘Tis of Thee” – started up.

The president kept going: ” — of the special relationship between our peoples and for the words of Shakespeare to this blessed plot, this earth, this realm, this England,” the president said as the awkward moment played out.

The Queen looked ahead as the UK anthem played.

“To the Queen,” the president finally said.

He lifted his glass to her, she smiled a bit uncomfortably.

But because the song was playing, no one drank from his or her glass, including the president, who put his glass down on the table.

Once again, Obama’s protocol team has failed him epically. I honestly don’t expect a president to know offhand the protocols for each country he visits, even those of the world powers. We don’t have a parliamentary system, so our leaders just don’t have that sort of preparation when they assume office. But I continue to be annoyed that he’s not receiving better preparation.