Obama on That Awful Austrian Language

Barack Obama doesn’t know what the word for “wheeling and dealing” is in “Austrian.”

Naturally, this verbal faux pax is generating some good natured ribbing from Glenn Reynolds, Ed Morrissey, and others.  Kate McMillan awards Quote of the Week honors to Mark Steyn for “We now know that Barack Obama, who urged us all to learn a second language, does not speak Austrian.”

Morrissey observes that, “George Bush’s critics rightly roasted him for his tortured syntax and waterboarded grammar, and used it to make the claim that the graduate of both Harvard and Yale was an idiot.”  He’s responded by creating an “Obamateurism of the Day” segment.

While this sort of thing is mildly amusing, people — even smart people — make verbal gaffes quite often.  Public officials who make speeches several times a day, naturally, will make a lot of them.  Since these speeches are often videotaped and almost always attended by reporters, each of these slip-ups will be recorded for posterity.

They prove very little about much of anything but they’re nonetheless constantly seized upon by opponents as signs of, well, something. 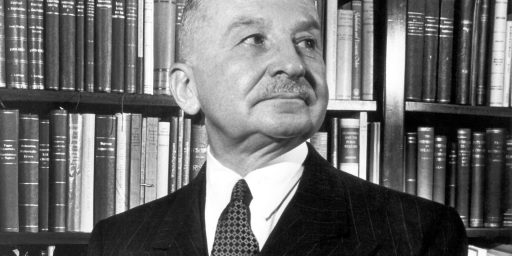 The Things One Learns (Austrian Economic and Praxeology Edition)