Obama Team Less Than Half Complete Seven months into his administration, President Obama has only 43 percent of his top appointees in place. Which, while shocking, isn’t at all unusual  Peter Baker for NYT:

Of more than 500 senior policymaking positions requiring Senate confirmation, just 43 percent have been filled — a reflection of a White House that grew more cautious after several nominations blew up last spring, a Senate that is intensively investigating nominees and a legislative agenda that has consumed both.

The process of assembling a new administration has frustrated presidents for years, a point brought home when George W. Bush received the now-famous memorandum titled “Bin Ladin Determined to Strike U.S.” eight years ago this month but still did not have most of his national security team in place when planes smashed into the World Trade Center and the Pentagon.

All parties vowed to fix the process, and Mr. Obama has a more intact national security team than his predecessor at this point. But even in this area, vital offices remain open. No Obama appointee is running the Transportation Security Administration, the Customs and Border Protection agency, the Drug Enforcement Administration or the Bureau of Alcohol, Tobacco, Firearms and Explosives. Mr. Obama still does not have an intelligence chief at the Department of Homeland Security, nor a top civilian in charge of military readiness at the Pentagon.

Mr. Obama is far enough along in his presidency that some early appointees are already leaving even before the last of the first round have assumed their posts. Among those who have left already is the person charged with filling the empty offices, Donald H. Gips, who quit as presidential personnel director to go to South Africa as ambassador last month.

Measuring the progress in appointments depends on what positions are counted and who is doing the counting. The White House Transition Project counts 543 policymaking jobs requiring Senate confirmation in four top executive ranks. As of last week, Mr. Obama had announced his selections for 319 of those positions, and the Senate had confirmed 236, or 43 percent of the top echelon of government. Other scholars have slightly different but similar tallies.

The White House prefers to include ambassadors, United States attorneys, marshals and judges, who are also subject to Senate votes but are not counted by the scholars. By that count, Mr. Obama has won confirmation of 304 nominees, compared with 301 for Mr. Bush, 253 for Bill Clinton and 212 for the first President George Bush at this point in their administrations. If lower-ranking senior executive service officials and political appointees who do not require Senate approval are counted, the White House said it had installed 1,830 people, at least 50 percent more than any of the last three presidents had at this stage.

It’s worth noting that one has to read seven “paragraphs” (NYT style apparently requires treating most sentences as complete thoughts and justifying a new paragraph) into the piece to start to get a sense that this is par for the course and into the 13th “paragraph” before this is stated outright.

Administration officials and some others focus on the ridiculousness of the vetting and confirmation processes which, I agree, need to be tamed. More obviously, however, is that question as to why so many of these positions are presidential appointees rather than career professionals to begin with.

Obviously, cabinet secretaries and senior advisors in controversial policy areas ought serve at the pleasure of the president. It just makes sense to have people there to enthusiastically push the elected executive’s agenda.

But why are the law enforcement agencies headed up by political appointees, often with no competence in the field? Shouldn’t transportation security, customs enforcement, drug and firearm law, federal marshals and the like by carried out in a non-political fashion by trained professionals? Ditto inspectors general and U.S. attorneys. The head of the FBI is an appointee but one who serves a ten-year term. Why not that model? Or just senior executive service careerists? 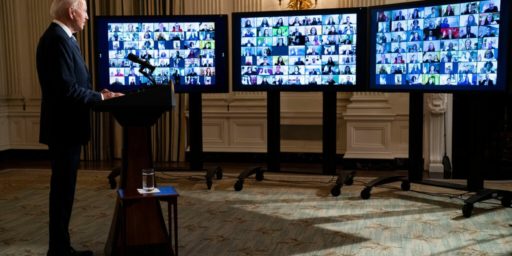 The Smoothest Transition in Decades

Are There Too Many Positions Requiring Senate Confirmation?