Another Obamacare case is heading to the Supreme Court, but it's unclear if they'll agree to hear it, or when they'd hear it if they did. 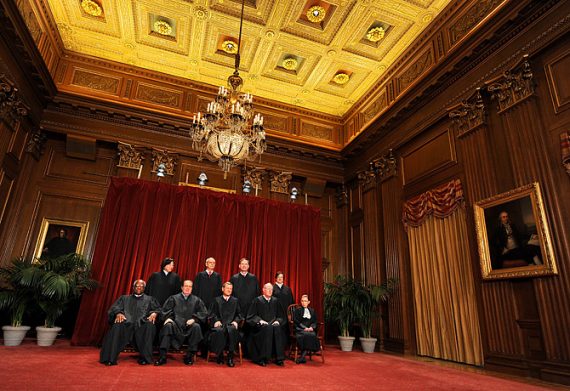 The plaintiffs who were on the losing side of the argument in the Fourth Circuit’s recent ruling that the Affordable Care Act’s subsidies are not limited only to people who purchased insurance through a state-based exchange are appealing the court’s ruling to the Supreme Court:

The four Virginians whose challenge to Obamacare subsidies suffered a defeat last week are now asking the Supreme Court to hear the case.

Their lawsuit was dismissed by the U.S. Court of Appeals for the 4th Circuit, which ruled that the Obama administration can legally award the subsidies through federally run insurance exchanges — not just those run by the states themselves. The individuals behind King v. Burwell say the subsidies are being improperly awarded through Virginia’s federally run exchange.

Sam Kazman, general counsel for the Competitive Enterprise Institute, said the goal is to get the issue resolved as quickly as possible, since millions of Americans obtaining insurance subsidies could be affected. The conservative group is funding the litigation.

“A fast resolution is also vitally important to the states that chose not to set up exchanges, to the employers in those states who face either major compliance costs or huge penalties, and to employees who face possible layoffs or reductions in their work hours as a result of this illegal IRS rule,” Kazman said in a statement Thursday. “Our petition today to the Supreme Court represents the next step in that process.”

On the same day that King v. Burwell was decided, of course, the Court of Appeals for the District of Columbia handed down its decision in Halbig v. Burwell in which it ruled completely opposite from the Fourth Circuit, finding that the language of the PPACA precluded the Federal Government from providing tax subsidies to people who purchased insurance on the Federal Exchange, something that applies to people living in each of the 36 states that chose not to establish their own state-based exchange. In that case, the Justice Department had announced that they would be seeking an appeal to the full D.C. Circuit Court of Appeals, which is a matter that is entirely within the discretion of the court. Thus, it seems clear that the Fourth Circuit case will be reaching the Supreme Court before the D.C. Circuit case.

Once it gets the Petition for a Writ of Certiorari in the King case, the Court will have a number of options. As a threshhold issue, I think it’s likely that the Court will eventually hear a case raising these issues simply because this is the type of challenge to an important piece of legislation that can’t be left to hang out there for the Circuit Courts to deal with on their own. That doesn’t mean that this specific case will be the one they accept, though. The Court could grant the appeal assuming that there are four Justices who want to accept the case. It could deny the appeal and the ruling of the Fourth Circuit will stand, although the issue would remain unresolved for the rest of the country. Finally, the Court could essentially wait on the appeal until its clear what the D.C. Circuit will do with the case pending before it. Once it receives a Certiorari petition, there is no real time limit within which the Court is required to act and, typically, it doesn’t become clear that a court is ready to act on a case until it has been set for one of the Court’s weekly conferences. Even then, it has become quite common in recent years for the Justices to re-list cases for conferences multiple times before finally deciding on whether or not to take an appeal. In this case, then, the Justices may decide to wait until the D.C. Circuit has ruled on the request for an en banc hearing and, if that request is granted, until after the full D.C. Circuit has decided the case. That way, the Court could hear both cases together. Of course, if this happens, it could mean that we wouldn’t see a hearing on this issue until the term that begins in October 2015, and may not see a ruling until sometime in 2016. Meanwhile, the current law and IRS regulations will remain in place and people who buy insurance on the Federal Exchange will continue to get subsidies under the law.