In a presidency, a picture or photograph becomes iconic only when it seems to express something people already think. When Gerald Ford was spoofed for being physically clumsy, it took off. The picture of Ford losing his footing and tumbling as he came down the steps of Air Force One became a symbol. There was a reason, and it wasn’t that he was physically clumsy. He was not only coordinated but graceful. He’d been a football star at the University of Michigan and was offered contracts by the Detroit Lions and Green Bay Packers.

But the picture took off because it expressed the growing public view that Ford’s policies were bumbling and stumbling. The picture was iconic of a growing political perception.

The Obama bowing pictures are becoming iconic, and they would not be if they weren’t playing off a growing perception. If the pictures had been accompanied by headlines from Asia saying “Tough Talks Yield Big Progress” or “Obama Shows Muscle in China,” the bowing pictures might be understood this way: “He Stoops to Conquer: Canny Obama shows elaborate deference while he subtly, toughly, quietly advances his nation’s interests.”

But that’s not how the pictures were received or will be remembered.

It is true that Mr. Obama often seems not to have a firm grasp of—or respect for—protocol, of what has been done before and why, and of what divergence from the traditional might imply. And it is true that his political timing was unfortunate. When a great nation is feeling confident and strong, a surprising presidential bow might seem gracious. When it is feeling anxious, a bow will seem obsequious.

The Obama bowing pictures are becoming iconic not for those reasons, however, but because they express a growing political perception, and that is that there is something amateurish about this presidency, something too ad hoc and highly personalized about it, something . . . incompetent, at least in its first year.

My colleague Dave Schuler, who supported Obama’s candidacy precisely because he preferred his temperament on foreign policy matters to John McCain’s, has expressed similar concerns.  He rightly attributes the proximate cause to poor staff work rather than personal failing on the part of Obama, on the not unreasonable theory that there was no reason to expect him to have a nuanced understanding of protocol upon taking office.  (Indeed, because  presidents don’t come up through the ranks in the way of a British prime minister, much less a hereditary monarch, it’s rare that we elect someone with that type of background.) But that’s a distinction without difference from the perspective of foreign leaders and the American public alike.

On a side note, we can take some consolation in the fact that at least Obama’s suit fits.  How far has the Japanese economy fallen that their emperor has to great foreign heads of states in a borrowed suit? 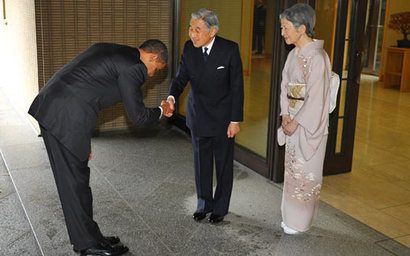