Nicholas Kristoff of NYT writes in his column that the whole world hates the US because of our arrogance in the Iraq matter and just, well, generally. He writes that, “It’s also possible that if all your friends say you’re making a mistake, they’re not mendacious back-stabbers but simply right.”

Certainly true but, as he later points out, it’s possible that you’re right, too: “In fairness, I also have to say that President Bush is right that we must reserve the option of invading countries unilaterally. Think back to 1993, when we let European passivity, particularly by John Major and François Mitterrand, block military strikes in Yugoslavia until tens of thousands of people had been killed. In retrospect we should have ignored the Europeans and unilaterally attacked Serbia to stop the genocide. Ditto in Rwanda. But in Iraq there is no such urgency.”

The irony of this argument is that the genocide in Yugoslavia–let alone the one in Rwanda–while horrific, posed no conceivable security threat to the US or (to borrow a phrase from Don Rumsfeld) “Old Europe” while the acquistion of weapons of mass destruction by Saddam quite likely does.

While there are some good arguments to be made against immediate military action in Iraq, anti-unilateralism isn’t one of them. Almost everyone seems to be willing to be “unilateral” (a strange term, since the US practically always has quite a few allies, if not always the same ones, in its military actions) when they believe in a particular cause. So why not just argue the merits of the cause? 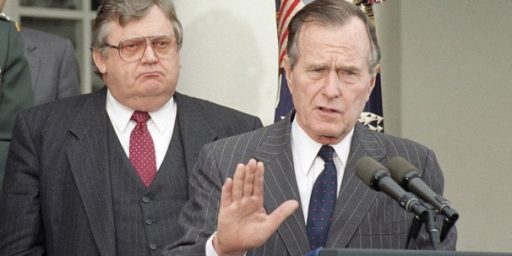