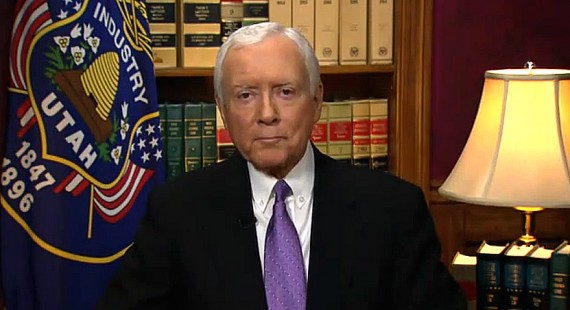 Orrin Hatch received some good news late yesterday when the person that many viewed as his most formidable challenger for the Republican nomination for Senate next year, Congressman Jason Chaffetz, announced that he would not be challenging the six-term Senator after all:

Chaffetz, 44, announced his surprise decision at an afternoon news conference in Salt Lake City, saying a run for Senate would result in “a multimillion-dollar bloodbath.”

Up until Monday, Chaffetz seemed prepared to take on Hatch, who was first elected in 1976 and has served longer than any senator in Utah history. He is bidding next year for a seventh term.

The two Republicans exchanged repeated barbs over the last few months, as Chaffetz stepped up his travels around the state, winning applause for his attacks on the 77-year-old senator. Chaffetz also received encouragement from conservative groups outside Utah, including the Club for Growth and FreedomWorks; both played an important role in last year’s ouster of GOP Sen. Bob Bennett of Utah.

A conservative by just about any measure, Bennett ran afoul of many tea party acolytes and grass-roots Republicans by supporting the 2008 Wall Street bailout — which he deemed necessary to save the country from economic collapse — and by working on bipartisan healthcare legislation with Democratic Sen. Ron Wyden of Oregon. Bennett was replaced by Republican Mike Lee, who ran under the tea party banner.

Hatch learned from what happened to Bennett, however, and has spent the better part of the last year enforcing his relationships with Utah GOP activists and, perhaps most importantly, national politicians identified closely with the Tea Party. Most recently, to the surprise and dismay of many, Sarah Palin spoke positively about Hatch in an appearance on Fox News Channel and signaled her support for his re-election. Other national conservatives have also quietly been rallying behind Hatch, who has been a fixture on the right in Washington for decades.

Of all the measures that Hatch took over the past several months, though, the one that may have caused Chaffetz in the end may have been the money:

“Hatch has been very effective at making it hard for Chaffetz to raise money. He really turned up verbal communication to donors. I think it scared a lot of the potential money. I know several people who were willing to give Chaffetz money once he had the nomination but they were hesitant to do it before. They weren’t willing to write Hatch off,” said Jeff Hartley, a former executive director of the state party who worked on Hatch’s 1994 Senate campaign but also has assisted Chaffetz’s political efforts. “I’m glad I won’t be conflicted.”

The Utah GOP picks its nominee in a rather unique fashion, which poses both advantages and disadvantages for a long term incumbent like Hatch. First, the party holds a convention attended by, at most, a few thousand people at which a vote is taken. If nobody gets more than 60% of the vote then the top two vote-getters face each other in a statewide primary. In 2010, Senator Robert Bennett came in third at the convention to State Sen. Dan Liljenquist and Mike Lee, and Lee ended up beating Lilijenquist in the primary. This time around, the primary likely would’ve come down to Chaffetz and Hatch, and Hatch’s fundraising likely would’ve made the difference. There appears to be some speculation that Liljenquist will challenge Hatch now that Chaffetz is out, but Chaffetz was viewed as the stronger candidate. Orrin Hatch seems to have dodged a bullet here.
FILED UNDER: Campaign 2012, Congress, Quick Takes, US Politics, Orrin Hatch, Utah