Not surprisingly, having ordered a successful mission to kill Osama bin Laden is being highlighted on President Obama's re-election tour. 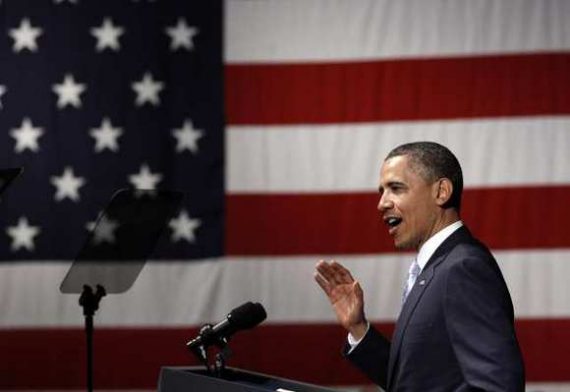 Not surprisingly, having ordered a successful mission to kill Osama bin Laden is being highlighted on President Obama’s re-election tour.

Osama bin Laden, mastermind behind the 9/11 attacks, is now an applause line in a presidential campaign speech.

Bin Laden’s name came up a couple of times in Obama’s address Tuesday evening at a fund-raising event in Austin, Texas.

Early in Obama’s appearance, someone shouted out, “Thank you for getting Bin Laden!”

Obama said that was a “case in point” – a reason for voters to let him “finish what we started.”

Later, Obama ticked off what he described as his administration’s accomplishments: lifting the ban on gays in the military; bringing troops home from Iraq.

And then: “And because of the extraordinary bravery of the men and women who wear this nation’s uniform and the outstanding work of our intelligence agencies,” Obama said, “Osama bin Laden will never again threaten the United States.”

The president and his team were careful to share credit and avoid triumphalism in the immediate aftermath of the mission. One doesn’t want to be seen gloating over death nor taking too much credit for what was, at the end of the day, a team effort. But it’s a significant, palpable achievement. It was inevitable that it would become an applause line in his stump speeches.