The Let's Do The Time Warp Again Edition OTB Caption ContestTM is now over.

The Let’s Do The Time Warp Again Edition OTB Caption ContestTM is now over. 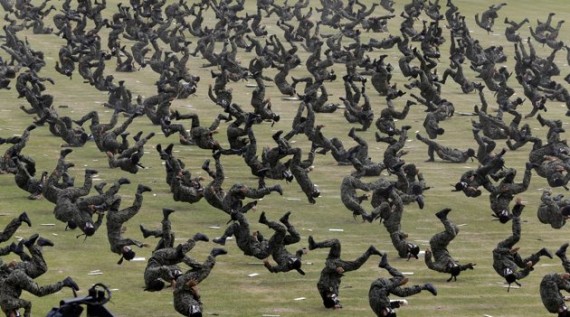 First: CSK – A strategic application of banana peels proved a far more effective deterrent to the invading hordes than did land mines.

Second: Steven L. Taylor – Everybody was kung-fu fighting. Those cats were fast as lightning. In fact it was a little bit frightning, But they fought with expert timing!

Third: OzarkHillbilly – The spectacle of endangered wild Republicans is caught on camera during their annual migration to Oklahoma.

Hal 10000 – The State Department described the ninja attack as a spontaneous response to the recent “Innocence of Ninjas” film.

NBH – Due to budget cuts, military personnel have been forced to tumble-dry their uniforms manually.

Wyatt Earp – The South Korean army: more fun than a barrel of monkeys.

Jeremy – Even the rest of the world was fed up with the replacement refs.

jd – Earthquakes in that region were rare but not entirely unheard of.

“Them pirates are goin’ down this time.”

The Arthur Dent School of Flying….

“Drifting along with the Tumbling Tumbleweed.”

The Monday Contest is ready to kick the tires and light the fires.