The Pass The Buck Edition OTB Caption ContestTM is now over.

The Pass The Buck Edition OTB Caption ContestTM is now over. 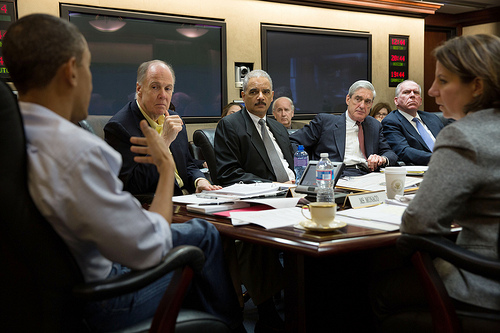 Second: markm – Holder: “…wull at least I only targeted political foes. You targeted EVERYBODY. What a richard.”

Third(tie): John Burgess – “Ok, which one of you is tapping my Blackberry?”

Third(tie): He who must not be named – Alright, who put “Ich bin ein Wiener” in Austrian on my teleprompter during last week’s trip to Vienna?

John425 – “So we know my wife, Michelle, called her mother last week. What did she say about me?”

Butch Bracknell – Yes, THAT Susan Rice. Yeah, New York. Yes!!! Why are you all looking at me like that??!!

OzarkHillbilly – “All right… Who invited the NSA?” “Nobody, sir.”

rudderpedals – “So to sum up: We’ve all agreed the guy with the troll mask goes on the IRS BOLO list and everyone else commenting at OTB goes on the NSA watchlist.”

JKB – This is what inside the head of your psycho ex-girlfriend looks like.

Hal 10000 – As Obama’s approval ratings fall, his cabinet feel less compelled to laugh at his jokes.

“Why is everyone leaning away from Holder.”

“OK… Who forgot to schedule my tee time this week.”

The Thursday Contest is already having a nice day.