The Flotsam and Jetsam Edition OTB Caption ContestTM is now over.

The Flotsam and Jetsam Edition OTB Caption ContestTM is now over. 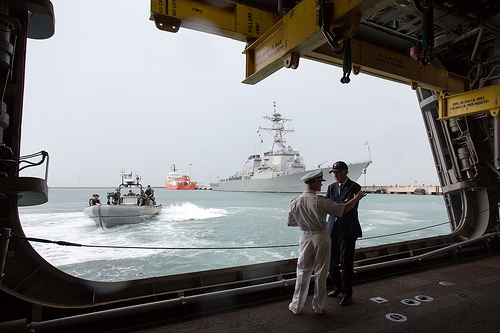 First: He who must not be named – Yes sir, it is a pretty big f*cking ship.

Second: Jenos Idanian #13 – “OK, sailor, here’s what you do: if those guys in the boats were pirates, you take a shotgun and fire two blasts straight up into the air. I guarantee you that’ll scare them off.”

Pinky – “What part of ‘underwater submarine door’ doesn’t make sense to you? They can’t fly in here, you moron!”

Patrick McCain – Prone to exaggeration, nobody really believed the Veep’s yarn that he was rescued at sea with a Bengal tiger, but The Life of Bi was a smashing box office hit.

John Burgess – “I’m sorry, sir, but we’re now entering US Territorial Waters. Please undress and stand over there while we get the scanner warmed up.”

This is a pretty good High Def TV, but you should see the one the President has.

“So just how in the hell can we submerge with this be winder open… Didya think of that?”
“Uh… no not really Mr. Vice President.”

So just where are that cowboy, construction guy, and indian anyway….

Biden: “So just how bad does Aquaman suck.”

The Thursday Contest is already getting a head.