The Rode Hard And Put Away Wet Edition OTB Caption ContestTM is now over.

The Rode Hard And Put Away Wet Edition OTB Caption ContestTM is now over. 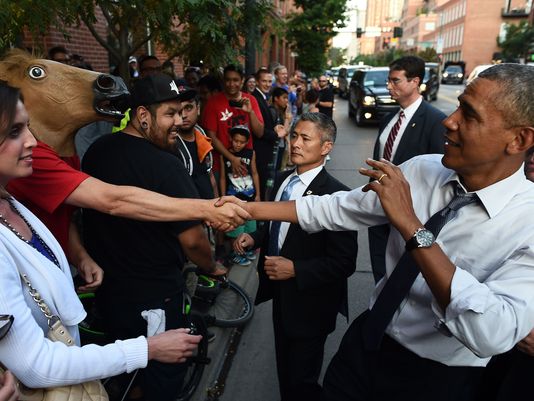 First: Moosebreath – I don’t mind shaking hands with a horse’s head. Every day in Washington, I meet plenty of horse’s asses.

Third(tie): charles austin – “You tell him I ain’t no band leader.”

OzarkHillbilly – Senator McCain! How nice to see you again sir! What did you do with your other half, Senator Graham?

JWH – Joe Biden would do anything to get face time with President Obama.

jd – Even more surprising, Shrek was just a few feet further along the route.

PAUL HOOSON – Obama: “So where’s the Rook and Bishop?”

Robert W. Armijo – Excuse me, sir. Have you seen my other half? Um, never mind.”

Horse: “C’mon… You’d do it for Randolph Scott.”

♬
A horse is of course,
not for political discourse,
so there is no recourse
with a horse, of course.

unless you want inane discourse,
with Secretariat of State John Kerry.
♬