The A Priest, a Rabbi and a Swami walk into a Babar Edition OTB Caption ContestTM is now over.

The A Priest, a Rabbi and a Swami walk into a Babar Edition OTB Caption ContestTM is now over. 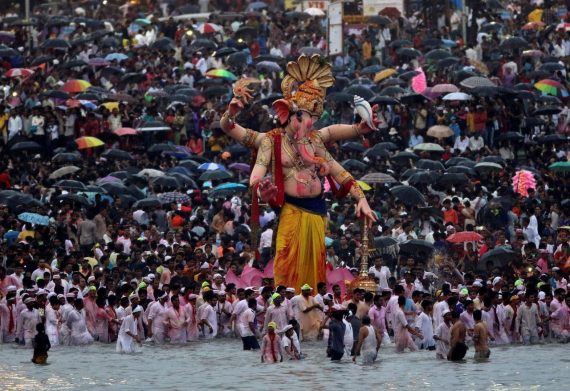 First: Moosebreath – No, Pritap, it’s forewarned is forearmed, not four-armed.

Second: Franklin – I didn’t think the 2016 Presidential election could get any uglier.

Mu – The first Ganges laundry day sponsored by Tide was a huge success.

Jon Waltz – Though the gathering throng might’ve hoped otherwise, Ganesha was not the Hindu god of clean drinking water.

barbintheboonies – I knew our God was the real one Take that you crazy Evangelists.

Paul Hooson – “Call me old fashioned, but I liked Bullwinkle much better…”

DrDaveT – So if you like pina coladas, and Ganesh Chathurti in the rain…

Tillman – India, the world’s largest democracy, celebrates the entry of a candidate more likable than the ones Americans have a choice over.

The NBA draft is about to get real.

Going on a trip? I see you have your trunk.

Finally an unbiased moderator for the debates.