The Overcompensating For Something Edition OTB Caption ContestTM is now over.

The Overcompensating For Something Edition OTB Caption ContestTM is now over. 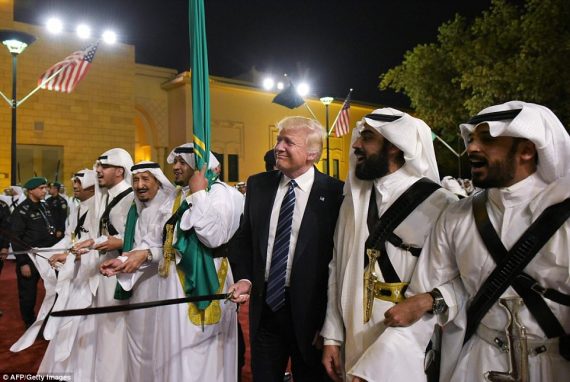 First: DrDaveT – If you look around the zariba and you can’t spot the camel… you’re the camel.

Second: Moosebreath – I’m surrounded by guys in white robes and funny headwear. Why didn’t Bannon tell me his supporters would be holding a rally in my honor?

Hal_10000 – Trump and the Saudis prepare for their next press conference.

Jersey Boy – This doesn’t violate the emoluments clause too, does it?

James Pearce – Everyone in this photo is wearing something on their head.

It’s silly to have an uproar over playing with sharp objects, for someone who was been given the nuclear launch codes.

“I’m not into pussy grabbing any more, I’ll just goose ’em a little with this.”

I don’t understand… Your fathers teach you how to kneel toward Mecca, How to ride camels, How to use swords, How to behead infidels, then you get in front of a camera and the first thing you say it, “IMAM”

When juggling swords you may only catch the wrong end once.