Considering how long it has been since Ronald Reagan was in the spotlight–he’s been out of the public eye for over a decade now and left the White House fifteen years ago–the turnout to pay respects to him at his California Library is astounding: 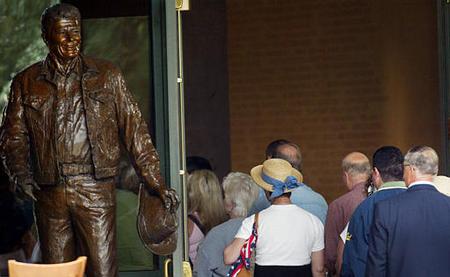 Waiting good-naturedly for as much as half a day in traffic jams and a parking lot, tens of thousands of people filed past Ronald Reagan’s flag-draped casket in an outpouring that forced organizers to extend the viewing period Tuesday by four hours.

An estimated 52,000 mourners had passed by the coffin in the 24 hours after the viewing began at noon Monday at Reagan’s presidential library. The nation’s 40th president died Saturday at age 93.

Nancy Reagan, resting and preparing for funeral events in Washington, D.C., watched the scene on television at her Bel Air home in Los Angeles, said Joanne Drake, chief of staff of Reagan’s office.

“‘It is unbelievable what I am seeing on TV,'” Drake quoted the former first lady as saying. “‘The outpouring of love for my husband is incredible.'”

The flow of mourners was interrupted briefly when Democratic presidential candidate John Kerry arrived. Standing before the casket, he made the sign of the cross, placed his hand over his heart, then left.

Traffic jams and the wait for shuttle buses encouraged camaraderie among the throngs, who passed the time sharing memories of Reagan and making new friends.

The viewing at the library in the hills west of Los Angeles was the first event in a week of national mourning. The body will be flown to Washington on Wednesday to lie in state at the Capitol, followed by a national funeral on Friday and a return to the library for burial at sunset.

Nancy Reagan, who accompanied the body to the library, received a message Tuesday from Pope John Paul II expressing “deep gratitude” for her husband’s commitment to the cause of freedom.

Among the celebrities who came to the library Tuesday was actress Bo Derek, who said she became a Republican when Reagan became president, citing his belief in smaller government and optimism.

“It’s something when you first see the flag on the casket,” she said. “I’m stunned. He was such a great man.”

The period in which Reagan’s body was to lie in repose at the library was originally supposed to end at 6 p.m. Tuesday, but the overwhelming turnout forced an extension to 10 p.m. More buses were added to the shuttle fleet to handle the crowds.

John Kerry (news – web sites) paused for a moment of silent reflection before the flag-draped casket of former President Reagan on Tuesday, a brief appearance in a national spotlight that suddenly has shifted from politics and the Democratic presidential candidate.

Head bowed, eyes closed and hands clasped in front, the Massachusetts senator stood for about a minute to pay his respects to Reagan, the Republican icon who died Saturday and whose body lay in repose at the presidential library.

Kerry, a Roman Catholic, made the sign of the cross and quietly recited the accompanying prayer before departing.

Like other dignitaries, Kerry did not have to wait hours with tens of thousands of mourners; an exception was made for the candidate and his visit lasted about 20 minutes.

Traveling to California to attend his daughter’s graduation from film school, Kerry decided to make a last-minute trip to the library in Simi Valley, a community northwest of Los Angeles. Aboard his campaign plane, Kerry spoke to reporters about Reagan, the current White House occupant Ã¢€” President Bush (news – web sites) Ã¢€” and Bush’s father. “I didn’t agree with a lot of the things he was doing, obviously,” Kerry said of Reagan, whom he called a “very likable guy.” But he added that he got along well with the Republican, was able to work with him and visited the White House a number of times during his two terms.

“I met with Reagan a lot more than I’ve met with this president,” Kerry said.

The Democrat also said he had more meetings with George H.W. Bush during his one term than he has had with President Bush.

“I liked his father very much. I like his dad. He’s a very good guy. He used to write notes. I have a number of notes from him. He’s very thoughtful,” Kerry said.

And, no, I’m not going to complain that Kerry got to cut in line. People with Secret Service escorts tend to do that.

Officials at the Ronald Reagan Presidential Library today extended the public viewing hours of the former president’s flag-draped coffin as thousands of mourners waited hours to pay their respects.

Nearly 60,000 people, including Democratic presidential candidate John Kerry, had trekked through the hilltop presidential library near Simi Valley as of 2 p.m.

The viewing hours were extended to 10 p.m. from 6 p.m., but a library official advised visitors to arrive at Moorpark College, where shuttle buses are transporting mourners to the library, by about 6 p.m. because of the lengthy lines and security screening.

The deployment of 25 more shuttle buses by the Metropolitan Transit Authority and increased traffic control by the California Highway Patrol helped cut waiting time from more than six hours early this morning to about two hours this afternoon, according to library officials.

“The family is deeply touched by this tremendous outpouring of support and regrets that everyone will not be able to be accommodated,” said library executive director R. Duke Blackwood in a statement.

Reagan’s body will lie in repose at the Ronald Reagan Presidential Library until Wednesday morning, when it will be flown to Washington to lie in state at the Capitol. After funeral services Friday, the body will be returned to the library grounds for a private interment. Reagan died Saturday at his Bel-Air home at age 93.

Impressive. The crowds are expected to be even larger in Washington.