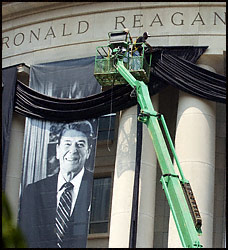 Things are rapidly getting underway in the DC area in preparation for the arrival of President Reagan’s casket, expected within the hour. 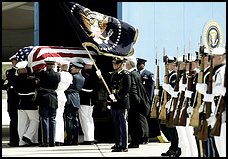 An Air Force 747 bearing the flag-draped coffin of former president Ronald Reagan left California’s Point Mugu Naval Air Station at 12:39 EDT today for the journey he traveled many times in life, eastward across America to the nation’s capital.

On board were Nancy Reagan and other members of the Reagan family, who accompanied the former president’s coffin in a long and solemn cortege from the presidential library in Simi Valley, Calif., where tens of thousands had paid their respects to the country’s 40th president.

To the strains of “Amazing Grace” played by a military band beneath a deep blue sky, the former first lady watched as an honor guard carefully removed her husband’s casket from its hearse and placed it aboard the blue and white plane that is known as Air Force One when the commander-in-chief is on board.

Nancy Reagan, 82, followed close behind, slowly ascending the stairway at the front of the plane, supported on the arm of Maj. Gen. B. Galen B. Jackman, commanding general of the U.S. Army Military District of Washington.

At the top of the stairs, she turned and waved to a crowd gathered to see the Reagans off.

The plane is due at Andrews Air Force base at roughly 5 p.m. and the former president’s coffin will be transferred to a hearse. From Andrews, the procession will move toward the Lincoln Memorial, within view of the White House and of Reagan National Airport. At 16th and Constitutional Avenue NW, the coffin will be transferred to a horse-drawn caisson that will take it up to the U.S. Capitol, where Reagan’s body will lie in state in the Capitol Rotunda until Friday morning. A state funeral service will be held there tonight. 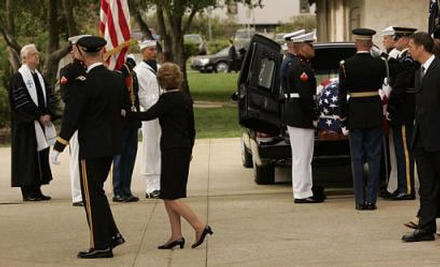 Preparations are well underway in the District: 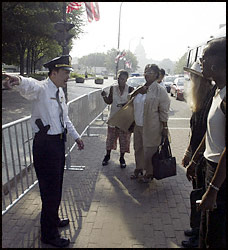 Major commuting routes are closing in Maryland, Virginia and the District so that Reagan’s coffin can be transported from Andrews Air Force Base to the Capitol.

From 3 to 9 p.m., Constitution Avenue is closed between 23rd Street NW and the Capitol, including the 12th and Ninth Street tunnels and all cross streets. Inbound traffic on the Roosevelt Bridge will be diverted to the E Street Expressway.

Other roads will close temporarily as the funeral motorcade makes its way into Washington. The tentative route for the procession begins at 6 p.m. at Andrews Air Force Base and goes from Suitland Road to Suitland Parkway, onto Interstate 295 north to the 11th Street bridge. From there, the procession will take Interstate 395 south, across the 14th Street bridge onto the George Washington Memorial Parkway north and move into Washington at the Memorial Bridge. On Constitution, between 15th and 17th streets, the coffin will be placed on a horse-drawn caisson and taken down Constitution to the Capitol.

Officials advised drivers in Maryland to take Route 301 or the western half of the Capital Beltway to avoid delays near Andrews.

While the 11th and 14th street bridges will close briefly to cars and pedestrians as the procession passes, the Memorial Bridge will remain closed from 3 to 6 p.m., said Natalie Jones-Best, emergency preparedness manager for the D.C. Department of Transportation. The Memorial Bridge, however, remains open to pedestrians.

“It’s been deemed a national event which puts the authority — it then rests with the Secret Service and other law enforcement entities,” Jones-Best said, noting that closures are subject to change if federal authorities deem it necessary.

The means nothing to people who don’t live in these parts but, basically, the whole place is shut down. Washington proper–by which I mean the area where the seat of government is located–is much smaller than one would think from watching the news.

Lots of traffic is the norm here and, certainly, DC is no stranger to big events that add to the snarl (although they’re usually on the weekends). Still, this is more than a little unusual:

Transportation officials were at a loss to think of a comparable event. The closest, they said, was the visit of Pope John Paul II in 1995, when parts of the Baltimore-Washington Parkway and Interstate 95 were closed for his motorcade to go from Baltimore-Washington International Airport to Camden Yards. Officials were in the dark about which routes would be taken for that trip, but roads were nearly empty as drivers stayed away.

But that was a one-day event on a Sunday morning. 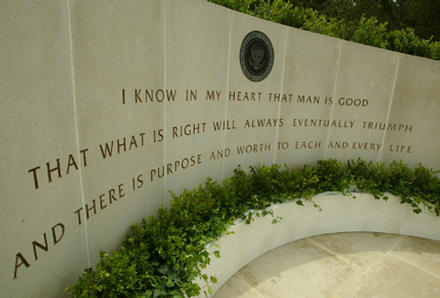 A closeup view of the inscription at the grave site for former President Ronald Reagan.
Washington Times 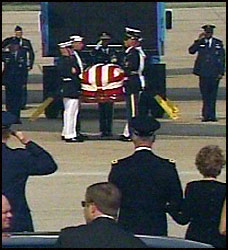 After a solemn send-off from his home state of California, the flag-draped casket containing the remains of former president Ronald Reagan arrived in Washington today amid military pomp and ceremony for a funeral procession down Constitution Avenue and a lying-in-state in the Capitol Rotunda.

Upon arrival at Andrews Air Force Base southeast of Washington, the mahogany casket was ceremoniously unloaded an Air Force 747 and placed in a hearse for the trip into the nation’s capital. The plane also carried Reagan’s widow, Nancy Reagan, and his three surviving children.

At the Capitol, police ordered waiting mourners and journalists to evacuate the area shortly before Reagan’s casket was due to arrive at Andrews Air Force Base, but gave an all-clear after a few minutes. U.S. authorities said the evacuation was ordered because of an unidentified aircraft that flew near the Capitol.

WaPo has a video of the arrival.