WaPo – A Day of Ritual and Remembrance 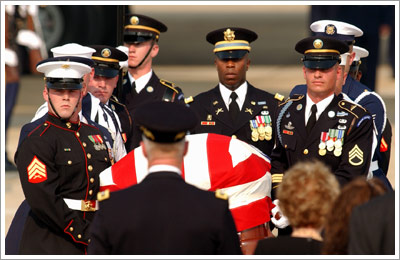 To the strains of solemn music and the slow beat of drums, the body of Ronald Wilson Reagan rode in a final parade through Washington yesterday to the Capitol Rotunda, where the 40th president of the United States will lie in state until his funeral tomorrow.

Tens of thousands of citizens lined Constitution Avenue and the West Entrance to the Capitol, many having waited for hours in wilting heat to pay their respects. Later, after an austere ceremony beneath the soaring dome, the first of an anticipated 150,000 mourners began walking past Reagan’s coffin, which lay on the black velvet-covered catafalque first used at the death of Abraham Lincoln.

“Ronald Reagan was more than just a historical figure. He was a providential man who came along just when our nation, and our world, needed him,” said Vice President Cheney beside the light-bathed and flag-draped coffin.

“Fellow Americans, here lies a graceful and a gallant man.” 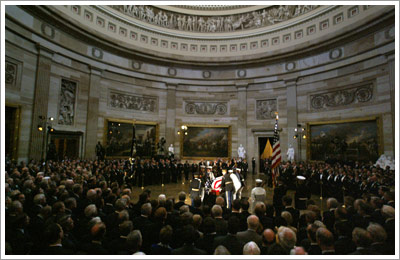 So began Washington’s first state funeral in more than 30 years, on a day steeped in tradition but also unnervingly 21st century. Just hours before Reagan’s body reached the Capitol, the building was evacuated in a panic amid reports that an unidentified aircraft was closing in. The plane turned out to be a private craft carrying Kentucky Gov. Ernie Fletcher [R] that had briefly lost contact with ground controllers. 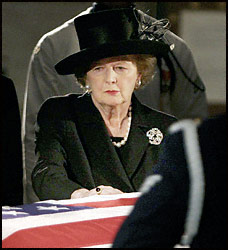 WaTimes – A final salute in a hall of heroes 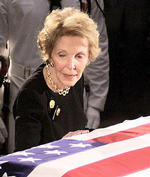 The Capitol dome became the focus for a nation in mourning for former President Ronald Reagan, whose remains were delivered by horse-drawn caisson yesterday to the Rotunda, where he will lie in state through tomorrow morning.

“Ronald Reagan was more than a historic figure. He was a providential man who came along just when our nation and the world most needed him,” Mr. Cheney said. “And believing as he did that there is a plan at work in each life, he accepted not only the great duties that came to him, but also the great trials that came near the end.”

WaPo – A Somber Procession Of Present and Past

The small, frail-looking woman in the black dress emerged from the limousine moments after the hearse bearing the body of her husband pulled to a stop in the eight empty lanes of Constitution Avenue.

It was 6:03 p.m., and as Nancy Reagan stood in the evening heat, the throng packed along the avenue behind the White House yesterday began to applaud and then to cheer. “We love you, Nancy!” someone hollered.

She smiled faintly and waved as she held the arm of a towering Army general, and an honor guard carried the flag-covered coffin of former president Ronald Reagan from the hearse to a four-wheeled, horse-drawn artillery caisson.

Everything was crisp and on time. A riderless horse named Sgt. York, with a pair of the president’s riding boots backward in the stirrups, bobbed impatiently. The pause was brief, and the former first lady was bustled back to her car. A man in the crowd bellowed: “God bless you, Nancy!” 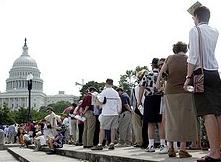 They were a dedicated lot, those thousands waiting outside the Capitol in the hours before the sun came up this morning. They had crossed states, skipped work and pulled kids from school to undertake a journey that, for many, was nothing short of a pilgrimage.

They waited, some for more than five hours, for a minute or two with a closed casket in the Capitol Rotunda, where the body of Ronald Wilson Reagan lay in state. Reagan breathed hope into the nation, many said, and after the long twilight that was his last decade, they were eager to pay homage.

Among them was Scott Cloud, who flew from Florida yesterday, motivated by “absolute and utter respect” for the former president. Cloud, a corrections officer, dropped $445 on a plane ticket and $150 on a hotel room. By 3:10 a.m., he had waited four hours, but he had no complaints. “The man symbolizes what America should be,” Cloud said.

Joe Kerstiens, of suburban Chicago, said he flew in to pay his respects to Reagan, who he called “probably the greatest president of the 20th century.”

“I don’t think there are any others that are still alive that I would probably make the trip for,” Kerstiens said. 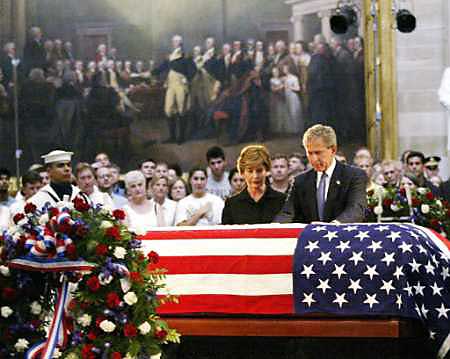 President Bush joined tens of thousands of people who filed silently by Ronald Reagan’s body at the U.S. Capitol on Thursday as Americans paused to honor their 40th president.

At least 2,000 people an hour filed slowly past the coffin in the Capitol Rotunda, some of them after waiting seven hours, recalling his optimism and kindness with little if any mention of the divisive aspects of his presidency.

Bush and first lady Laura Bush returned to Washington from a Group of Eight summit in Georgia and went immediately to the Capitol to pay their respects.

They walked in holding hands, stood next to the casket and bowed their heads. The president touched the flag-draped casket with both hands. Bush then went to Blair House, the presidential guest quarters, to visit with members of the Reagan family. 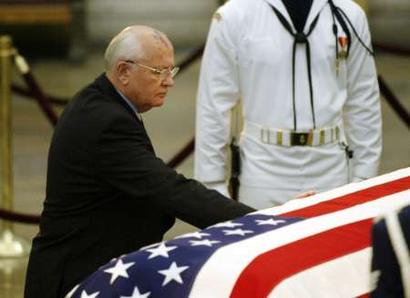 Former Soviet leader Mikhail Gorbachev, formally representing Russia, came to the Capitol on Thursday afternoon to pay his respects. Gorbachev crossed swords with Reagan at tense summits in the 1980s and then allowed the Cold War to end peacefully months after Reagan left office.

After the pomp and circumstance of Wednesday’s stately procession, when Reagan’s body slowly made its way through Washington on a horse-drawn military carriage, it was a day for ordinary Americans to show their respects.

Many past and present world leaders and veterans of the Cold War struggle against Communism that Reagan helped to end were arriving in Washington for a funeral service on Friday at Washington’s National Cathedral. 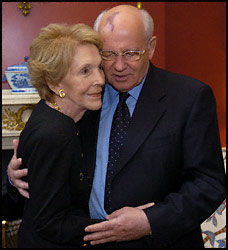 Washington Times has a wonderful gallery of photos from the Reagan funeral preparations.