President Bush 41 Out of Intensive Care

President George H. W. Bush has been moved out of the intensive care unit and seems to be improving nicely. 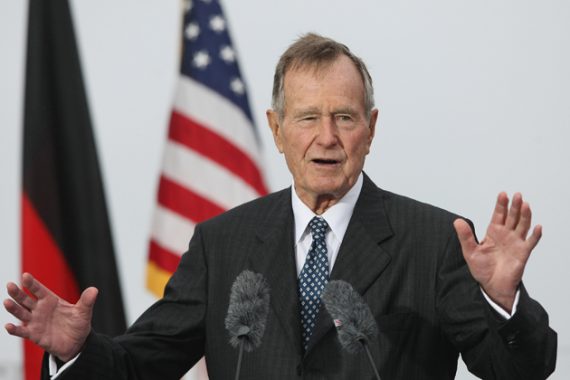 President George H. W. Bush has been moved out of the intensive care unit and seems to be improving nicely.

“President Bush’s condition has improved, so he has been moved today from the intensive care unit to a regular patient room at The Methodist Hospital to continue his recovery,” family spokesman Jim McGrath said Saturday. “The Bushes thank everyone for their prayers and good wishes.”

Bush was hospitalized Nov. 23 for treatment of a bronchitis-related cough. He was moved to intensive care at the Houston hospital on Dec. 23 after he developed a fever.
On Friday, McGrath said Bush had improved since arriving in the ICU. He said he was alert and in good spirits and was even doing some singing.

McGrath said Saturday morning that future updates on Bush’s condition would be made as warranted.

Bush, the 41st president, is the country’s oldest living former president by a few months.

He’s managed to keep up his spirits despite his recent scare, including issuing a statement a couple of days ago telling us to ”put the harps back in the closet.” I’m hoping we can keep them there for a while. I’m rooting for him to make at least one more parachute jump to celebrate his 90th birthday. Another on his 100th might be asking for a bit much, but I wouldn’t put it past him.