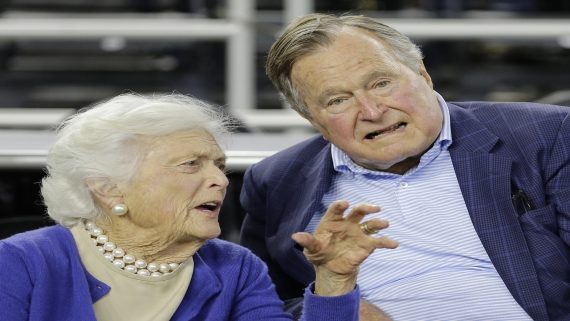 Both former President Bush and his wife Barbara have been hospitalized in a Houston-area hospital:

Former president George H.W. Bush was under observation at an intensive care unit in Houston on Wednesday after being treated for an “acute respiratory problem stemming from pneumonia,” according to a statement from his office.

The update described the 92-year-old Bush as “stable and resting comfortably” at Houston Methodist Hospital, but gave no details on how long the former president could remain under medical attention. At the same hospital, former first lady Barbara Bush was also admitted Wednesday as a “precaution” after experiencing fatigue and coughing, a separate statement said.

The former president was taken to the hospital Saturday for shortness of breath, and doctors performed a procedure to “protect and clear his airway,” the statement said. Bush was under sedation during the medical intervention, it added.

In a tweet, Bush spokesman Jim McGrath wrote that he has “responded very well to treatments.” McGrath added: “Hope to have him out soon.”

NBC News is reporting that the former President has been moved to ICU after what was apparently a second procedure to deal with breathing issues, and that his wife was also hospitalized:

While George H.W. Bush remains in the intensive care unit of a Houston hospital after experiencing “shortness of breath,” the former president’s wife, Barbara, has also been admitted for a separate health issue, the couple’s spokesman said Wednesday.

The former first lady was taken to Houston Methodist Hospital on Wednesday morning “as a precaution after experiencing fatigue and coughing,” spokesman Jim McGrath said in a new statement following an update on her husband’s condition.

Her husband, 92-year-old Bush, was taken to Houston Methodist Hospital to treat an acute respiratory problem stemming from pneumonia, the statement said.

“Doctors performed a procedure to protect and clear his airway that required sedation,” McGrath said. “President Bush is stable and resting comfortably in the ICU, where he will remain for observation.”

Bush chief of staff Jean Becker earlier said he’s “fine and he’s doing really well,” according to the Houston Chronicle. Earlier, local media quoted Bush’s chief of staff as saying the 41st president was expected to go home from Houston Methodist Hospital in a few days after he was first hospitalized Saturday.

Few details are being provided regarding the treatment that the former President and his wife are receiving. Hopefully, though, they will both recover quickly and be released.