The natural intuition of the aluminum tariff is that it would help Alcoa, the largest manufacturer of aluminum in the U.S. But apparently these things are a bit more complicated that one's intuition would indicate.

The natural intuition of the aluminum tariff is that it would help Alcoa, the largest manufacturer of aluminum in the U.S. But apparently these things are a bit more complicated that one’s intuition would indicate.

Investors who thought the tariffs imposed by the Trump administration would help U.S. aluminum producers can think again—Alcoa Corp. says they actually hurt.

Alcoa reported late Wednesday second-quarter earnings and revenue that rose above expectations, but lowered its outlook for adjusted EBITDA (earnings before interest, taxes, depreciation and amortization), citing factors such as current market prices and tariffs on imported aluminum.

Here is Alcoa’s stock price for the past few months. 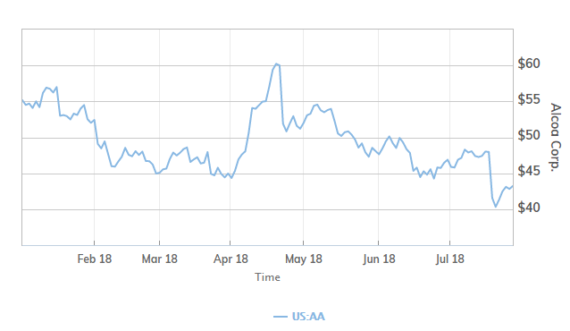 So what on earth is going on?

“First, because tariffs are driving only a limited increase in supply, U.S. imports will remain essential,” Harvey said, according to a transcript provided by FactSet.

He said the restarted production capacity attributed to the tariffs has totaled 300,000 metric tons, or just 0.5% of the 5.7 million metric ton U.S. market, and all of that from Alcoa competitors.

“More importantly, even if all U.S.-curtailed capacity was back online and producing metal, the U.S. would still need to import the vast majority of its required primary aluminum, with approximately 60% from Canada, which is key to the North American supply chain,” Harvey said. “Canada is an important source of metal for U.S. aluminum producers.”

Alcoa operates three smelters in Canada, which import into the U.S. Starting in June, Harvey said, he expected a $12 million to $14 million negative monthly impact “as long as tariffs are in place,” which reduces some of the benefits the company would see from higher premiums in the U.S.

What does that mean in more simple terms? It means that the tariffs have done pretty much nothing in terms of providing new domestic supply of aluminum. This is not surprising. The tariffs we implemented under an executive order. Executive orders can be undone by the stroke of the next President’s pen. And even if Trump does run and win a second term he cannot run for a third, and typically the same party does not control the presidency after doing so for two consecutive terms. In short, there is likely quite a bit of uncertainty that these tariffs will be around much past 2025. Given this uncertainty how many people are going to be interested in spending tens of millions of dollars trying to bring an aluminum smelter on line? Probably not many. So domestic supply is not really going to increase. So…foreign suppliers are critical, but those foreign suppliers face the tariff and so does Alcoa….because they own smelting plants outside of the U.S. In other words, the tariffs are hurting Alcoa.

“While tariffs have pushed the Midwest premium higher, providing U.S. aluminum producers with a benefit, there is no long-term certainty to the duration of those tariffs,” he said. “Tariffs also distort the market by incentivizing the restart of aged, inefficient capacity, which contributed to the curtailments and closures in the first place.” The newest U.S. smelter, he said, is about 40 years old.

Pretty much as I described it.

President Trump is, to put it as nicely as possible, is a complete and obstinate economic ignoramus. And most people think in terms of simple supply and demand analysis. The tariffs lead to a higher price, so the supply will increase, right? Not necessarily. Businesses also take into account expectations, what do they expect to see in the future. Given how Trump implemented these tariffs there is considerably uncertainty. In fact, Trump is creating what can be called “regime uncertainty”. Regime uncertainty is kind of like systemic risk except that it is uncertainty and it is imposed by the current political regime. Regime uncertainty is where uncertainty is increased across the entire market process by politically motivated actions and rhetoric. A businesses person is now less certain as to the benefits he can obtain from a given investment. And uncertainty is different from risk. This distinction was noted by economist Frank H. Knight. Risk is where quantification is possible. For example, a bet at a roulette table entails risk in that depending on which bet you place you can quantify the probability of winning (and thus losing) and you also now the payout. Uncertainty is when quantification is not possible. For example, uncertainty in business would be bringing a brand new product to market. You can look at similar items to get some idea of whether or not it will work, but ultimately there is some element that simply cannot be quantified. Regime uncertainty can convert what was previously seen as merely a risk into uncertainty. For example, expanding a factor for an already established good entails more risk than uncertainty, but if the political rhetoric suggests that such an investment could be wiped out by the stroke of the President’s pen then that is uncertainty especially with flip-flopper like Trump.

So turning back to Alcoa,

Harvey said that while he appreciated the Trump administration’s efforts to help the U.S. aluminum industry, just raising prices on imports won’t help U.S. producers or consumers over the long term.

Rather than tariffs, he said the Trump administration needs to provide incentives for producers to restart and create new capacity, cooperate with allies to eliminate unfair subsidies abroad, and support investments in research and development of smelting technology.

Indeed. Trump’s entire approach to international trade has been to throw much into disarray. Global supply chains for example could be seriously jeopardized. Most cars today are made all over the world then assembled in the country where the final product is to be assembled. Thus, if Trump were to suddenly throw a tantrum and use his pen on those cheaters in Asia or Europe of both it could very well raise the price of cars sold by Ford, GM, as well as Toyota or Daimler-Benz.

Trump’s withdrawal of the U.S. from the Trans Pacific Partnership was most unfortunate. That agreement would have provided one of the largest Free Trade Agreements in the world and would have left the Chinese out in the cold. That is, as the signatories to the agreement would have seen an increase in their overall trade levels China would be sitting on the sidelines not participating. To get in on that party they would have almost surely had to provide certain concessions. Instead Trump alienated those trading partners. Then he turned around and further alienated Canada and Mexico again along with our European trading partners and allies. Now it is the U.S. that is pretty much out in the cold looking at the rest of the world moving forward. And this also provides a unique opportunity for China to step in and take on more of a role in shaping future trade agreements. I would liken this kind of behavior to that of a toddler, but even a toddler will generally not engage in this much self-harm.