Warren Community College English professor, John Daly, said that Ã¢€œReal freedom will come when soldiers in Iraq turn their guns on their superiors.Ã¢€ Rebecca Beach, a freshman at Warren Community College in Washington, New Jersey, received this unexpected reply to a recent email she sent the faculty at her school announcing the appearance of decorated Iraq war hero, Lt. Col. Scott Rutter, on Thursday, November 17 to discuss AmericaÃ¢€™s accomplishments in Iraq.

In the email, Daly told Rebecca that he will ask students in his English and writing classes to boycott the event and also vowed Ã¢€œto expose [her] right-wing, anti-people politics until groups like [RebeccaÃ¢€™s] wonÃ¢€™t dare show their face on a college campus.Ã¢€ DalyÃ¢€™s mean spirited and hateful comments were directed at Rebecca for organizing Lt. Col. Scott Rutter and for hanging up fliers contrasting the number of people killed under communism to those liberated under Ronald Reagan.

I am asking my students to boycott your event. I am also going to ask others to boycott it. Your literature and signs in the entrance lobby look like fascist propaganda and is extremely offensive. Your main poster “Communism killed 100,000,000” is not only untrue, but ignores the fact that CAPITALISM has killed many more and the evidence for that can be seen in the daily news papers. The U.S. government can fly to dominate the people of Iraq in 12 hours, yet it took them five days to assist the people devastated by huricane Katrina. Racism and profits were key to their priorities.

I will continue to expose your right-wing, anti-people politics until groups like your won’t dare show their face on a college campus. Real freedom will come when soldiers in Iraq turn their guns on their superiors and fight for just causes and for people’s needs–such freedom fighters can be counted throughout American history and they certainly will be counted again.

Assuming this isn’t a forgery, this is a major breach of professional ethics on part of the professor. Accosting a student for her political views is outrageous. Advocating mass murder, too, is well beyond the bounds of reasoned discourse.

This is not a simple case of “academic freedom,” either. For one thing, the guy is an English professor and thus talking totally outside his area of expertise. More importantly, this is not a discussion of a controversial school of academic thought backed by research; it is merely uninformed ranting. I’ve defended the idiotic drivel of Ward Churchill and others with whom I’ve disagreed with in the past (see related posts below); this is beyond the pale, however.

A part-time professor at Warren County Community College stands by some controversial comments he e-mailed to a student there that have raised eyebrows around the country. John Daly, an adjunct English professor, said Thursday he believes the war in Iraq will end only when American soldiers turn their guns on their commanders. “The only possible end for the war is not going to be from our politicians, who represent corporations,” Daly said. “We’re going to stay in Iraq and occupy the Middle East as a profit source that will only change when the students at WCCC who are sent there to die for oil profits decide they’re not going to die there.”

Daly said he was a member of International ANSWER, an anti-war group. He e-mailed WCCC freshman Rebecca Beach on Sunday, responding to her request to tell his students about a campus visit by retired Lt. Col. Scott Rutter. Daly’s message eventually reached conservative broadcaster Sean Hannity, who read it Thursday during his nationally syndicated radio program.

Rutter, now a Fox News commentator, spoke Thursday about his experiences in Iraq as a battalion commander in the first and current wars in Iraq, and on the way the media report on Iraq.

“The administration at WCCC believes Rebecca Beach is an innocent student acting alone, but I recognized her literature right away as being part of a national right-wing movement,” Daly said. “Her group is an ultra right-wing, possibly fascist, group.”

Beach, who said she has never met Daly, said she invited Rutter to campus as part of her group’s celebration of Freedom Week, which commemorates Veterans Day and the toppling of the Berlin Wall on Nov. 9, 1989. She said she was shocked by Daly’s message. “We were just celebrating and raising awareness,” Beach said. “We want free speech and tolerance, and they want it for themselves and not for others. That’s just utterly ridiculous.” 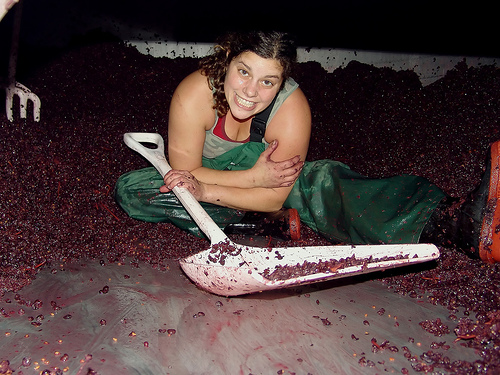