Last week at the New Atlanticist, Dr. Bernard Finel, senior fellow at the American Security Project, in the interests of correcting our counter-terrorism policy advocated a substantial change in our policies with respect to the Middle East. A particular portion of his proposals caught my eye:

Specifically, a serious assessment of the national interest will, I would argue, show that we could safely reduce our footprint in the Middle East dramatically. The United States simply does not need to be involved in every issue in the region. This is a not a call for a surrender. Surrender involves giving up national interests. This argument is for a more clear-eyed pursuit of them. Consider energy, for instance. When one adds together the military costs of a presence in the Middle East, the political costs of alliances with authoritarian oil-producing countries, and the economic costs of exporting billions of dollars abroad to buy oil, it makes dramatic investment in alternative energy seem a lot less costly. Indeed, assessing all the costs may even make a dramatic increase in domestic oil exploration — even in environmentally sensitive areas — seem cost-effective.

But in addition to reducing our footprint in the region, we should reduce the fingerprints of our policy on the lives of people in the Middle East. This is a fundamentally counterintuitive proposal. After all, there is a broad consensus in American policymaking circles that the United States ought to be more involved in such things as promoting human rights, solving the Israeli-Palestinian dispute, and engaging in a deep and sustained public diplomacy effort. Unfortunately, all of those recommendations serve to deepen and reinforce the common belief in the Muslim world that the United States is an octopus whose tentacles reach in every corner of the region. The more visibly engaged we are, the more ammunition we give to those who seek to blame every misfortune on the United States.

One of my common patterns of thought is to frame any given proposition as a debate proposal, I did so in this specific context, and said as much in the comments to the post. Dr Finel was kind of enough to respond to my comment with enthusiasm, welcoming a debate with me on the subject.

Over the next week or so we’ll be debating the following proposition:

Resolved: that the United States should disengage from the Middle East

Dr. Finel will make the affirmative case; I will provide the negative.

Dr. Finel’s affirmative case will be posted in the next day or so; it will be followed by my cross-examination; I’ll state my negative case; Dr. Finel will cross-examine me; and so on.

Debating is a form seen only occasionally in the blogosphere and I think this is an exciting project. The longer format, extending over multiple posts, will enable us to explore the subject in more detail than is usually found in the hit-and-run blog post. It’s an important topic and, regardless of the immediate situations in Iraq and Afghanistan, is worthy of substantial reflection, rarely seen as a consequence of the poverty of our public discourse which is mainly limited to headlines, op-eds, and sound bites and is often enmeshed in partisan squabbling. 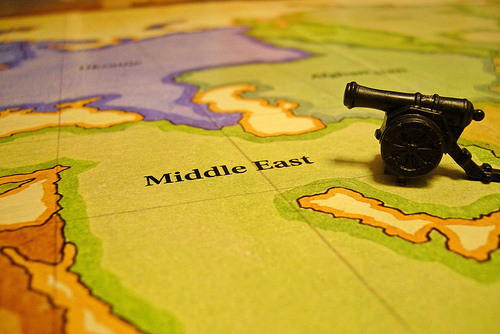