At some point they are going to realize that making random crazy people the face of “teh movement” is a bad idea. – John Cole

He’s referring to yesterday’s firing of Carrie Prejean as Miss California USA, not for her controversial political statements or for embarrassing nude photos that are all over the Internet, but because she was a prima donna who frequently blew off appearances without notice and was insubordinate and incredibly arrogant towards her superiors.  (Also, she’s a horrible speller. That was not cited in the dismissal notice, however.)  He also cites, in passing, Joe “The Plumber” Wurzelbacher.

UPDATE: Charles Austin in the comments below and Kevin Holtsberry via Twitter correctly point out that “face of ‘teh movement'” is overstating Prejean’s prominence.  While I do seem to recall a blogger or two touting her for public office, most of what we got was a defense of her comments as “patriotic” and “you go girl” type exhortations in the face of some pretty over-the-top treatment from those on the left.

Still, I wish conservatives would be more careful about the figures they embrace and quicker to distance themselves from unseemly conduct on their part once more is revealed.

Why Does Sarah Palin Keep Getting The First Amendment Wrong? 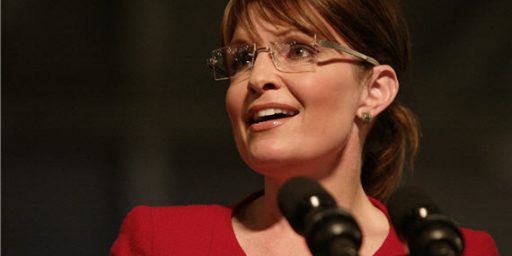 The End Of Sarah Palin?