Rand Paul, Kentucky’s newly minted Republican nominee for the Senate, is coming under some fire for his view that, while racial discrimination is abhorrent, he thinks private business owners ought be free to engage in it.

Think Progress points to an interview with the Louisville Courier-Journal.   Here’s the video:

Politico’s Ben Smith notes that Rand got into this issue with NPR’s Robert Siegel, too.

SIEGEL: You’ve said that business should have the right to refuse service to anyone, and that the Americans with Disabilities Act, the ADA, was an overreach by the federal government. Would you say the same by extension of the 1964 Civil Rights Act?

SIEGEL: But are you saying that had you been around at the time, you would have – hoped that you would have marched with Martin Luther King but voted with Barry Goldwater against the 1964 Civil Rights Act?

Dr. PAUL: Well, actually, I think it’s confusing on a lot of cases with what actually was in the civil rights case because, see, a lot of the things that actually were in the bill, I’m in favor of. I’m in favor of everything with regards to ending institutional racism. So I think there’s a lot to be desired in the civil rights. And to tell you the truth, I haven’t really read all through it because it was passed 40 years ago and hadn’t been a real pressing issue in the campaign, on whether we’re going for the Civil Rights Act.

SIEGEL: But it’s been one of the major developments in American history in the course of your life. I mean, do you think the ’64 Civil Rights Act or the ADA for that matter were just overreaches and that business shouldn’t be bothered by people with the basis in law to sue them for redress?

Dr. PAUL: Right. I think a lot of things could be handled locally. For example, I think that we should try to do everything we can to allow for people with disabilities and handicaps. You know, we do it in our office with wheelchair ramps and things like that. I think if you have a two-story office and you hire someone who’s handicapped, it might be reasonable to let him have an office on the first floor rather than the government saying you have to have a $100,000 elevator. And I think when you get to the solutions like that, the more local the better, and the more common sense the decisions are, rather than having a federal government make those decisions.

Doug Mataconis, Oliver Willis, and I were engaged in a brief Twitter back-and-forth on this one last night.  It’s a tougher question than it sounds, especially to a 20-something liberal.

Paul’s views are identical to those I held when studying Constitutional Law as an undergrad and not all that far removed from my current position.   There’s no question in my mind that private individuals have a right to freely associate, that telling owners of private businesses whom they must serve amounts to an unconstitutional taking, and that it’s none of the Federal government’s business, anyway.   Further, in the context of 2010 America, I absolutely think that business owners ought to be able to serve whomever they damned well please — whether it’s a bar owner wishing to cater to smokers, a racist wanting to exclude blacks, or a member of a subculture wishing to carve out a place for members of said subculture to freely associate with only their kind out of purely benign purposes.

The problem, circa 1964, was that there really was not right to freely associate in this manner in much of the country.   Even once state-mandated segregation was ended, the community put enormous pressure on business owners to maintain the policy.   That meant that, say, a hotel owner who wished to rent rooms without regard to color really weren’t free to do so.   More importantly, it meant that, say, a black traveling salesman couldn’t easily conduct his business without an in-depth knowledge of which hotels, restaurants, and other establishments catered to blacks.   Otherwise, his life would be inordinately frustrating and, quite possibly, dangerous.

In such an environment, the discrimination is institutionalized and directly affecting interstate commerce.   It was therefore not unreasonable for the Federal government to step in using their broad powers under the 14th Amendment.    I’m still not sure parts of the Civil Rights Act of 1964 (especially the issue in question here) or the Voting Rights Act of 1965 (especially treating individual states differently from others) are strictly Constitutional.   But they were necessary and proper in the context of the times.

The problem that libertarians and strict Constitutionalists have, however, is that precedents set under extreme and outrageous conditions are often applied to routine and merely inconvenient ones.   (Or, as the old adage goes, “Hard cases make bad law.”) Once someone’s private business is transformed by fiat into a “public accommodation,” there’s precious little limit to what government can do with it.   Requiring private individuals to treat black people with a modicum of human dignity is one thing and dictating what kind of oil they can cook their French fries in or how much salt they can put on them is quite another.   But, in principle, they’re not much different.

All that said, I agree with Doug that this is a pointless and harmful debate for Paul to get sucked into.  This has been settled law since before I was born and a Senate campaign isn’t a political science seminar.   This is the sort of question that more seasoned politicians know how to dodge.

Update (Doug Mataconis) I’ve been generally quite supportive of Rand Paul’s candidacy, and was quite pleased when he won on Tuesday night, but when I heard about this story late yesterday, starting with the NPR interview that set it all off, I started to cringe. This is one of those areas where philosophically “pure” libertarians get themselves into trouble politically, and it’s an issue that, quite honestly has no relevance to the 21st Century America.

Paul’s position is essentially the same one that Barry Goldwater took in 1964 when he voted against the 1964 act due to the provisions of Title II and Title VII covering private acts. In Goldwater’s view, the Constitution did not give Congress the authority to regulate purely private behavior. The Supreme Court held in Heart of Atlanta Motel v. United States and Katzenbach v. McClung, that these provisions were Constitution based upon Congress’s power under the Commerce Clause. It is, in all honestly, a tortured interpretation of a Constitutional provision that was originally intended to prevent states from impeding domestic trade, but it was also largely consistent with previous Supreme Court precedent. I think the decisions are wrong, but they are the law of the land. The Civil Rights Act of 1964 is not going to be repealed, and it serves no purpose for Paul to let himself be dragged into a debate about it.

Which is the main reason I cringed when I watched this unfold last night. It’s fine for libertarian bloggers to debate this issue among themselves, but a politician can’t allow himself to be trapped into a debate where he ends up defending segregated lunch counters in an election in the South. The damage is done and these clips will follow Paul from now to November, but he needs to put this issue behind him. Then, he needs to take a few days off. 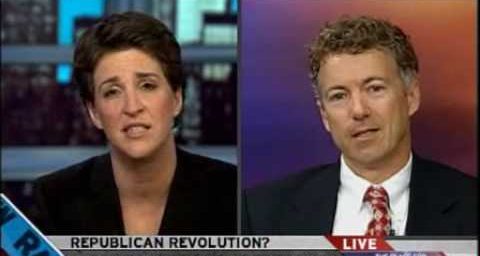