Two cases in the news today raise questions about the NFL commissioner's power. 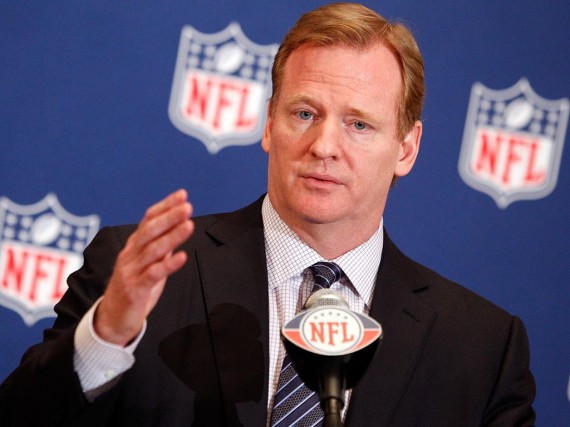 First, in an interview with GQ‘s Will Leitch, quarterback Michael Vick reveals that Goodell “steered” him to the Philadelphia Eagles when he was ready to take much higher offers from the Buffalo Bills or Cincinnati Bengals.

“I think I can say this now, because it’s not going to hurt anybody’s feelings, and it’s the truth,” Vick tells me a few weeks after the commencement ceremony. “I didn’t want to come to Philadelphia. Being the third-team quarterback is nothing to smile about. Cincinnati and Buffalo were better options.” Those two teams wanted him and would’ve allowed him to start, but after meeting with commissioner Roger Goodell and other reps from the NFL, Vick was convinced—and granted league approval—to sign with Philly. “And I commend and thank them, because they put me in the right situation.

The early buzz on this is questioning whether this constitutes “collusion.”

While it was far from a given that Vick would return from a long layoff spent in prison and return to his former glory–much less, as has been the case, far surpassed it–the impact of Goodell’s decision is to help a perennially good team in Philly reload while keeping two perennial losers in the doghouse. The Eagles have since traded the aging Donovan McNabb to the Washington Redskins for draft picks and former backup Kevin Kolb to the Arizona Cardinals for a Pro Bowl cornerback and another draft pick while actually upgrading at quarterback. Meanwhile, the Bills have been struggling to find a serviceable quarterback since Jim Kelly retired in 1996 (minus a decent season and a half from Drew Bledsoe).

On the other hand, the Bengals are a cesspool of an organization while the Eagles are rock solid under the leadership of head coach Andy Reid. And, certainly, it’s worked out quite well for Vick.

Additionally, Goodell has reluctantly allowed former Ohio State quarterback Terrelle Pryor to participate in the NFL’s supplemental draft–but with the proviso that he “will be ineligible to practice or play until Week 6 of the NFL season.”

Why the 5-game suspension? It’s what he would have had to serve at Ohio State for violating NCAA rules.

At first blush, this is simply outrageous. Not only is the suspension disproportionate–more than Pittsburgh Steelers quarterback Ben Roethlisberger served after being accused of sexual assault or umpteen players served for DUIs, assaults, and steroids violations–but it’s for offenses that didn’t violate either the law or NFL policy, arguably weren’t even immoral, and occurred well before Pryor was subject to NFL jurisdiction. Further, the League never punished Reggie Bush and other players who committed offenses that put their college programs in hot water with the NCAA.

In this case, though, it’s the reverse of what Goodell did with Vick. In that case, he put the best interests of the player before the competitive balance of the League. In this case, he’s screwing over the player to send a pretty important message: the NFL is no longer going to be a sanctuary for people who cheated in college and harmed the interests of its tacit partner.

Like it or not, major college athletics serves as a feeder program for the NFL. It’s simply in the best interests of Goodell and his League, then, to take prudent measures to bolster the NCAA’s efforts to clean up its game.

Further, Goodell has now set a precedent which will allow him to take action in case the burgeoning scandal involving the Miami Hurricanes turns out to be as serious as it looks. The U has been a key source of NFL superstars over the last quarter century but many of those players have apparently committed violations so severe that there are serious murmurs about the school receiving the “death penalty” that would shut down the program. If that happens, expect Goodell to severely punish the perpetrators.

In both cases, then, Goodell  acted dictatorially and, from the perspective of those harmed by his decisions, unfairly. But his calls were far from capricious; they served the best interests of his League and its players.

Sometimes, it’s good to be king.

UPDATE: Commenter 11B40 alerts me to an incident with basketball legend Connie Hawkins that took place before I was born. According to his Wikipedia entry, he was implicated in 1964 for involvement in a point shaving scandal that took place when he was a freshman at Iowa–in the days when freshmen were ineligible to play.

As a result of the investigation, despite not being charged or arrested, Hawkins was expelled from Iowa. No other college — either in the NCAA or NAIA — would offer him a scholarship. NBA Commissioner J. Walter Kennedy let it be known that he would not approve any contract for Hawkins to play in the league. At the time, the NBA had a policy barring players who were even slightly rumored to be remotely involved with point-shaving scandals. As a result, when his class was eligible for the draft in 1964, no team selected him. He went undrafted in 1965 as well before being formally banned from the league in 1966.

With the major professional basketball league having effectively blacklisted him, Hawkins played one season for the Pittsburgh Rens of the American Basketball League and was named the league’s Most Valuable Player. When that league folded, Hawkins spent three years performing with the Harlem Globetrotters.
During the time Hawkins was traveling with the Globetrotters, he filed a $6 million lawsuit against the NBA, claiming the league had unfairly banned him from participation and that there was no substantial evidence linking him to gambling activities. Hawkins’s lawyers suggested that he participate in the new American Basketball Association as a way to show that he was talented enough to participate in the NBA.

Hawkins joined the Pittsburgh Pipers in the inaugural 1967-68 season of the American Basketball Association, leading the team to a 54-24 regular-season record and the 1968 ABA championship. Hawkins led the ABA in scoring that year and won both the ABA’s regular-season and playoff MVP awards.
The Pipers moved to Minnesota for the 1968-69 season, and injuries limited Hawkins to 47 games. Hawkins had surgery on his knee. The Pipers made the playoffs despite injuries to their top four players, but were eliminated in the first round of the playoffs.

The NBA settled with Hawkins after the 1968-69 season, paying him a cash settlement of nearly $1.3 million, and assigned his rights to the expansion Phoenix Suns.

Fascinating. Hawkins was eventually elected to the Basketball Hall of Fame in 1992 despite this injustice.

UPDATE (Dodd): NFL spokesman Greg Aiello disputes the version of events everyone’s bandying about. And Vick himself has “clarified” his quoted remarks:

I did speak with many people, but the decision to sign in Philadelphia was based on my discussions with my agent, my family and with Coach (Andy) Reid. And after those discussions, it became clear to me that this was the place I wanted to play and resume my NFL career. The commissioner never told me to sign or not sign with particular teams. Again, I want to make it perfectly clear that this was a decision I made and, as I have said numerous times before, I’m very happy with the way it has worked out for me and my family.

Take that for what you will. Myself, I very much doubt Goodell actively steered Vick anywhere, though it would certainly be easy for Vick to construe any remarks he made about Philly being a better, more stable environment that way given the circumstances at the time.

Let’s remember also that when Vick was signed, he was a backup. As recently as Week 2 last season he was a backup with some packages the team could use him for. No-one knew that, by season’s end, he would have played his way into supplanting Kolb so completely the Eagles would trade Kolb away. Goodell obviously has to be neutral as between teams, but any suggestion that Goodell gave the Eagles some sort of unfair advantage simply doesn’t fit the facts.