As expected, Russia is not pleased with Kosovo’s secession from Serbia. Russia denounced Kosovo’s independence declaration Sunday, warning that the move threatened to ignite a new conflict in the Balkans and calling on NATO and U.N. officials in the territory to nix the decision.

Russia requested a meeting of the U.N. Security Council, which held closed-door talks Sunday afternoon. Russia, which has veto power on the council, wants the council to renew efforts — long-since pronounced dead by the U.S. and other Western nations — to reach a negotiated settlement of Kosovo’s status.

Kosovo’s parliament approved the declaration of independence from Serbia, backed by the U.S. and European allies. Kosovo had formally remained a part of Serbia even though it has been administered by the U.N. and NATO since 1999, when NATO airstrikes ended former Yugoslav leader Slobodan Milosevic’s crackdown on ethnic Albanian separatists.

Russia’s Foreign Ministry, lashing out within minutes of the declaration, said Russia supports Serbia’s “just demands to restore the country’s territorial integrity.” It said nations backing Kosovo’s claim were supporting separatism and would shake “the foundations of a world order that has developed over decades.” Russia claimed the declaration violates the U.N. Charter ensuring the territorial integrity of member nations and threatens “the escalation of tension and ethnic violence in the region, a new conflict in the Balkans.” The ministry urged the U.N. mission and NATO forces in Kosovo to carry out their mandate by “annulling the decisions of the Pristina government organs and taking severe administrative measures against them.”

Russia has stressed its opposition to any decision on Kosovo’s status that is not accepted by Serbia. It has warned that recognition of Kosovo by the United States and other nations would encourage separatists in the former Soviet Union, across Europe and around the world. Russia is widely expected to block recognition of Kosovo in the United Nations and continue backing traditional ally Serbia.

President Vladimir Putin said Friday that Russia would not “ape” the West, indicating it would not immediately recognize long-standing independence claims of pro-Russian separatist regions in ex-Soviet Georgia.

The tragic irony of Yugoslavia was that it was formed as state to united the Southern Slavs and ultimately disintegrated because of tribal and religious tensions. While I often joked that Slobodan MiloÅ¡eviÄ‡ was Yugoslavia’s Abraham Lincoln, willing to kill as many of his countrymen as he had to in order to preserve the Union, breakup ultimately made sense.

The United States has espoused, albeit often without much action, the idea of national self-determination since the Wilson administration — especially in Europe. I never thought the Yugoslav War was our fight and opposed U.S. military action there throughout the 1990s but thought and still think that the various micro-states had the right to declare and fight for their sovereignty.

Even that position, though, isn’t without cost. As AP Vienna bureau chief William Kole explains, it puts us at odds with the region’s most important player. American flags flutter almost everywhere in Kosovo, a symbol of how — through successive Democratic and Republican administrations — the U.S. has long been a friend of this nation in the making. But Washington’s stalwart support of statehood in recent months in the face of fierce resistance from Russia has raised the stakes in its increasingly testy relations with a Kremlin increasingly eager to shore up its influence among its former Soviet vassal states.

By backing Kosovo’s independence outside the U.N. Security Council, the U.S. and its European allies have taken a calculated risk. They are betting that the turbulent Balkans will not plunge into violence. If it does, the White House will take much of the blame. Reflecting the concern, President Bush said Sunday that the U.S. will work to prevent violence.

“Moscow is convinced that it holds the moral high ground and will live to see yet another Western ‘blunder’ on par with Iraq,” said Oksana Antonenko, a Russia expert at the International Institute for Strategic Studies, a London-based think tank. “If violence returns to Kosovo, Russia and the West will blame each other, worsening general relations,” Atonenko warned. The world is watching to see whether “Kosovo will be an exception — that independence will bring stability and rule of law, not chaos and insecurity,” she said.

Russia is a traditional ally of Serbia. But that is not the only reason it vehemently opposes Kosovo’s independence. The Kremlin contends it will set a dangerous precedent for secessionist movements across the former Soviet Union, including Chechnya and Georgia.

The confrontation over Kosovo could harden Russia’s resolve on the other disputes that have brought ties to a post-Cold War low. While analysts say Russia is unlikely to restrict energy supplies to the West in response to recognition of the province, ignoring Russia’s concerns could make Moscow less cooperative on crucial issues such as Iran’s nuclear program.

This is a classic case of the logical dictates of Realpolitik clashing with our moral positioning and building soft power equity. The Russians obviously know the nuances of the region better than we do and are in a better position to influence the situation. Still, I believe our bet here is the right one.

Russia is right, though, that Kosovo’s declaration will likely inspire other secessionist movements. Already, theChechen rebels are declaring their solidarity. It’s far from clear that forced suppression of nationalist yearnings is the solution.

There are so many undercurrents in the secession of Kosovo from Yugoslavia it’s hard to know where to begin to comment—Serbian nationalism, Pan-Slavism, Realpolitik vs. internationalist idealism, and so on. I have no answers for these, only questions: 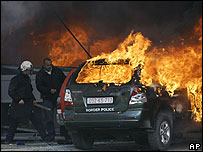