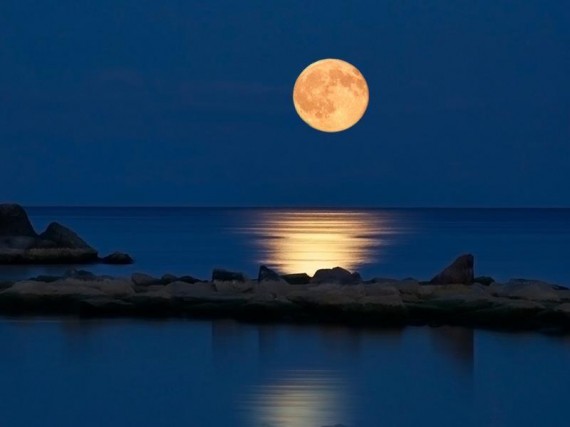 One of the most interesting, and longest running, debates in astronomy has been the question of exactly how the Moon became a satellite of Earth. One theory had it that the Moon was a wandering extra-planetary body that happened to get caught up in the gravity of a young Earth billions of years ago. Another, more recent, theory speculated that the Moon was the result of a collision between Earth and an object as  large as Mars. The idea of a young Earth being bombarded by a Mars-sized object billions of years ago is fascinating enough, but now scientists are starting to look in a new direction to explain where the Moon came from:

The Earth and the Moon have always been close in astronomical terms, but now a newly proposed theory from Harvard planetary scientists suggets that they may be more like family.

A really violent family, that is, considering the new theory states that a planetary body half the size of Mars struck Earth moving at a speed of 12-miles-per second, instantly vaporizing but cleaving off a huge chunk of our home planet down to its core and dispersing it into space, and that this material is what coalesced to form the Moon.

The new theory, proposed by Harvard planetary science professor Sarah T. Stewart and Matija Ćuk, a Harvard postdoc and principal investigator at SETIand published in a paper in the journal Science on Wednesday, is actually is itself a combination and tweaking of two other theories — the “giant impact hypothesis” and the “fission hypothesis,” neither of which alone satisfactorily explained how the moon first appeared in Earth’s sky billions of years ago.

The “giant impact hypothesis,” the previous leading theory behind the Moon’s formation, suggests that a giant, Mars-sized object known as Theia smacked into the Earth over 4.5 billion years ago and broke apart, and that the resulting debris from both the Earth and Theia formed the moon.

But that theory has a few big problems, including the fact that the impactor, Theia, should be responsible for the majority of the Moon’s current composition.

It’s not — in fact, the Moon is much more like Earth (they have nearly identical isotopic signatures, that is, the molecular formations of elements such as silicon, chromium, tungsten and oxygen are similar on both bodies).

So Harvard researchers have tweaked that theory and combining it with another known as the “fission hypothesis,” which states that a part of the Earth’s own crust broke off and drifted away to form the moon.

The “fission hypothesis,” first proposed in 1879 by George H. Darwin, son of revered naturalist Charles Darwin, also has issues of its own. Namely, it requires that the Earth would have been spinning much faster than than it does presently, for which Darwin (the son) had no compelling explanation.

But Stewart and Ćuk can now account for this as well: In their model, the Earth was spinning much more rapidly, such that a “day” at the time of the Moon’s formation was just two or three hours long. This would mean that the composition of the Earth itself was already highly unstable, approaching the point at which it would break apart on its own and with a much more “squished” shape resembling a football, due to the massive rotational forces.

So, the next time you’re looking up at the Moon, you might want to think that you’re very likely looking at a piece of the planet that you call home.

Here’s a video that the Harvard scientists created to demonstrate their hypothesis: