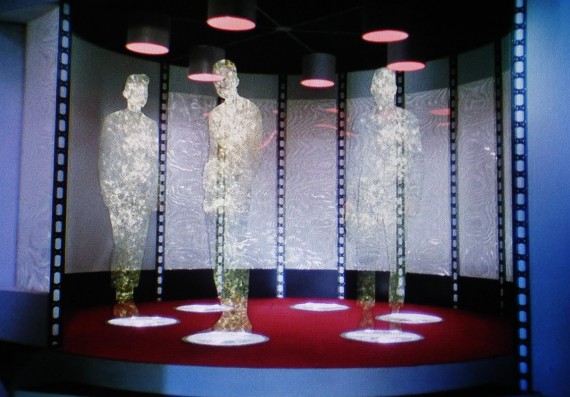 It’s not exactly Star Trek’s transporter, but scientists have made what could be a huge breakthrough toward a new method of information transfer:

Scientists in the Netherlands have moved a step closer to overriding one of Albert Einstein’s most famous objections to the implications of quantum mechanics, which he described as “spooky action at a distance.”

In a paper published on Thursday in the journal Science, physicists at the Kavli Institute of Nanoscience at the Delft University of Technology reported that they were able to reliably teleport information between two quantum bits separated by three meters, or about 10 feet.

Quantum teleportation is not the “Star Trek”-style movement of people or things; rather, it involves transferring so-called quantum information — in this case what is known as the spin state of an electron — from one place to another without moving the physical matter to which the information is attached.

Classical bits, the basic units of information in computing, can have only one of two values — either 0 or 1. But quantum bits, or qubits, can simultaneously describe many values. They hold out both the possibility of a new generation of faster computing systems and the ability to create completely secure communication networks.

Moreover, the scientists are now closer to definitively proving Einstein wrong in his early disbelief in the notion of entanglement, in which particles separated by light-years can still appear to remain connected, with the state of one particle instantaneously affecting the state of another.

They report that they have achieved perfectly accurate teleportation of quantum information over short distances. They are now seeking to repeat their experiment over the distance of more than a kilometer. If they are able to repeatedly show that entanglement works at this distance, it will be a definitive demonstration of the entanglement phenomenon and quantum mechanical theory.

Succeeding at greater distances will offer an affirmative solution to a thought experiment known as Bell’s theorem, proposed in 1964 by the Irish physicistJohn Stewart Bell as a method for determining whether particles connected via quantum entanglement communicate information faster than the speed of light.

In contrast, the scientists at Delft have achieved the ability “deterministically,” meaning they can now teleport the quantum state of two entangled electrons accurately 100 percent of the time.

They did so by producing qubits using electrons trapped in diamonds at extremely low temperatures. According to Dr. Hanson, the diamonds effectively create “miniprisons” in which the electrons were held. The researchers were able to establish a spin, or value, for electrons, and then read the value reliably.

Assuming this pans out, we could be on the verge of an era of quantum computing that will make much of what we consider high technology today seem like child’s play by comparison. Additionally, as the article goes on to note, a world of quantum computing would be far more secure than what we rely upon today, which would pose interesting challenges for governments seeking to conduct surveillance on adversaries, allies, and their own citizens. As for the matter-energy transporter part of all this, we’ll have to wait until someone invents that Heisenberg Compensator.