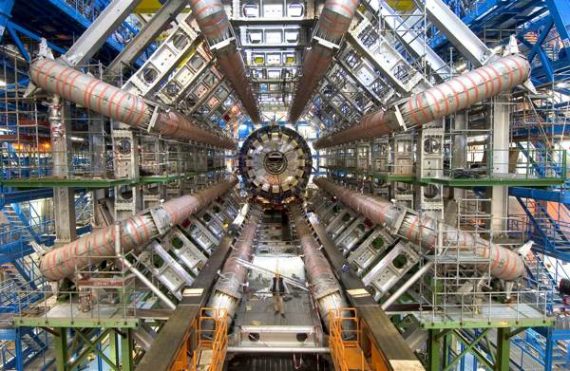 ASPEN, Colo. — Physicists working at CERN’s Large Hadron Collider said Wednesday that they had discovered a new subatomic particle that looks for all the world like the Higgs boson, a potential key to understanding why elementary particles have mass and indeed to the existence of diversity and life in the universe.

“I think we have it,” said Rolf Heuer, the director general of CERN, in an interview from his office outside of Geneva, calling the discovery “a historic milestone.” His words signaled what is probably the beginning of the end for one of the longest, most expensive searches in the history of science. If scientists are lucky, the discovery could lead to a new understanding of how the universe began.

Dr. Heuer and others said that it was too soon to know for sure whether the new particle, which weighs in at 125 billion electron volts, one of the heaviest subatomic particles yet, fits the simplest description given by the Standard Model, the theory that has ruled physics for the last half century, or whether it is an imposter, a single particle or even the first of many particles yet to be discovered . The latter possibilities are particularly exciting to physicists since they could point the way to new deeper ideas, beyond the Standard Model, about the nature of reality. For now, some physicists are calling it a “Higgs-like” particle.

“It’s great to discover a new particle but you have find out what its properties are,” said John Ellis, a theorist at CERN, the European Organization for Nuclear Research.

Joe Incandela, of the University of California, Santa Barbara, and spokesperson for one of two groups reporting data on Wednesday called the discovery, “very, very significant. It’s something that may, in the end, be one of the biggest observations of any new phenomena in our field in the last 30 or 40 years, going way back to the discovery of quarks, for example.”

Here at the Aspen Center for Physics, a retreat for scientists that will celebrate its 50th birthday on Saturday, the sounds of cheers and popping corks reverberated early Wednesday morning against the Sawatch Range through the Roaring Fork valley of the Rockies, as bleary-eyed physicists watched their colleagues read off the results in a Webcast from CERN. It was a scene duplicated in Melbourne, Australia, where physicists had gathered for a major conference, as well as in Los Angeles, Chicago, Princeton, New York, London, and beyond — everywhere that members of a curious species have dedicated their lives and fortunes to the search for their origins in a dark universe.

At CERN itself, 1,000 people stood in line all night to get into the auditorium, according to Guido Tonelli, a CERN physicist who said the atmosphere was like a rock concert. Peter Higgs, the University of Edinburgh theorist for whom the boson is named, entered the meeting to a standing ovation.

Confirmation of the Higgs boson or something very like it would constitute a rendezvous with destiny for a generation of physicists who have believed in the boson for half a century without ever seeing it. And it reaffirms a grand view of a universe ruled by simple and elegant and symmetrical laws, but in which everything interesting in it, such as ourselves, is due to flaws or breaks in that symmetry.

According to the Standard Model, which has ruled physics for 40 years now, the Higgs boson is the only visible and particular manifestation of an invisible force field, a cosmic molasses that permeates space and imbues elementary particles that would otherwise be massless with mass. Particles wading through it would gain heft.

Without this Higgs field, as it is known, or something like it, physicists say all the elementary forms of matter would zoom around at the speed of light, flowing through our hands like moonlight. There would be neither atoms nor life.

Physicists said that they would probably be studying the new Higgs particle for years. Any deviations from the simplest version of the boson — and there are hints of some already — could open a gateway to new phenomena and deeper theories that answer questions left hanging by the Standard Model: What, for example, is the dark matter that provides the gravitational scaffolding of galaxies? And why is the universe made of matter instead of antimatter?

“If the boson really is not acting standard, then that will imply that there is more to the story — more particles, maybe more forces around the corner,” Neal Weiner, a theorist at New York University, wrote in an email, “What that would be is anyone’s guess at the moment.”

The CERN press release is, of course, cautious in describing what it is the scientists believe they have discovered:

Geneva, 4 July 2012. At a seminar held at CERN1 today as a curtain raiser to the year’s major particle physics conference, ICHEP2012 in Melbourne, the ATLAS and CMS experiments presented their latest preliminary results in the search for the long sought Higgs particle. Both experiments observe a new particle in the mass region around 125-126 GeV.

“We observe in our data clear signs of a new particle, at the level of 5 sigma, in the mass region around 126 GeV. The outstanding performance of the LHC and ATLAS and the huge efforts of many people have brought us to this exciting stage,” said ATLAS experiment spokesperson Fabiola Gianotti, ”but a little more time is needed to prepare these results for publication.”

“The results are preliminary but the 5 sigma signal at around 125 GeV we’re seeing is dramatic. This is indeed a new particle. We know it must be a boson and it’s the heaviest boson ever found,” said CMS experiment spokesperson Joe Incandela. ”The implications are very significant and it is precisely for this reason that we must be extremely diligent in all of our studies and cross-checks.”

“It’s hard not to get excited by these results,” said CERN Research Director Sergio Bertolucci. ” We stated last year that in 2012 we would either find a new Higgs-like particle or exclude the existence of the Standard Model Higgs. With all the necessary caution, it looks to me that we are at a branching point: the observation of this new particle indicates the path for the future towards a more detailed understanding of what we’re seeing in the data.”

Five Sigma certainty is the gold standard in particle physics and essentially means that the scientists are as certain that they can be that the measurements they recorded are not the result of an anomaly or random chance. As the BBC reports, Professor Peter Higgs himself, who was part of the team of scientists whose work led tot the creation of the theories surrounding the Higgs Boson and, of course the still-theoretical particle that bears his name, was present for the announcement at CERN:

Prof Peter Higgs, after whom the particle is named, wiped a tear from his eye as the teams finished their presentations in the Cern auditorium.

“I would like to add my congratulations to everyone involved in this achievement,” he added later.

“It’s really an incredible thing that it’s happened in my lifetime.”

It’s not often that you get particle physicists emotional, or popping champagne corks early in the morning as one group gathered in Aspen, Colorado did this morning, so that’s a pretty good indication of just how big a deal this discovery is, and Tom Chivers tries to explain what it all means in layman’s terms:

First, as was hinted yesterday, the CMS detector – one of the two major experiments at the Large Hadron Collider – has definitely foundsomething. Prof James Incandela, the spokesman for the experiment, said they have seen something “very strong, very solid” at the 125GeV (gigaelectronvolt) mass, where they had thought they’d seen something in December. The first slide showed a curve of results, with a single bump up at 125GeV. “It’s hard to leave that [slide]. Sorry, I was lost for a moment”, Prof Incandela said, wonderingly. The Atlas experiment has found a result in a similar (125Gev to 126GeV) range, Prof Fabiola Giannotti has told the audience.

Second, there’s still some confusion over whether it is the Standard Model Higgs, or something different. The results of the various collisions showed some variation: some “channels” showed something very Higgs-like, while others showed something different. It’s not clear yet whether the difference between the two is statistical noise or whether there is something more. Sean Carroll, a physicist who is liveblogging the result for Discover magazine, asks: “Are we seeing a standard Higgs with a couple of statistical fluctuations, or are differences in different channels the sign of something new?”

Third, whether it’s the predicted Higgs or something subtly (or wildly) different, a new particle has almost certainly been spotted. With all the the CMS data combined, the result is a 4.9 standard deviation result. The arbitrary mark for a “discovery” is five standard deviations. Cern isn’t announcing an official discovery – that is expected in the next few months – but it is around 99.9999 per cent likely that this isn’t a statistical fluke.

Actually, it would probably be much more interesting if it turned out that this new particle didn’t comply with the Standard Model, because that would mean we’d be entering a whole new world of physics and that our understanding of the universe today is somewhat akin to the blind man trying to describe an elephant.