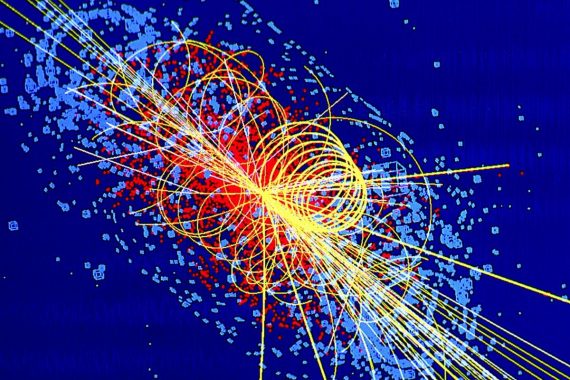 Two of the men who developed the theoretical construct that posited the existence of the Higgs Boson, a subatomic particle long considered theoretical until its existence was confirmed thanks to the Large Hadron Collider, have received the Nobel Prize in Physics:

The “God particle” became the Prize particle on Tuesday.

Two theoretical physicists who suggested that an invisible ocean of energy suffusing space is responsible for the mass and diversity of the particles in the universe won the Nobel Prize in Physics on Tuesday morning. They are Peter Higgs, 84, of the University of Edinburgh in Scotland, and François Englert, 80, of the University Libre de Bruxelles in Belgium.

The theory, elucidated in 1964, sent physicists on a generation-long search for a telltale particle known as the Higgs boson, or the God particle. The chase culminated in July 2012 with the discovery of the Higgs boson at the Large Hadron Collider at CERN, in Switzerland.

Dr. Higgs and Dr. Englert will split a prize of $1.2 million, to be awarded in Stockholm on Dec. 10.

The Swedish Royal Academy of Sciences said the prize was “for the discovery of the mechanism that contributes to understanding the origin of the mass of subatomic particles.”

“You may imagine that this is not unpleasant,” Dr. Englert said in an early morning news conference.

As of the time of the news conference, the academy still had not been able to reach Dr. Higgs, the J.D. Salinger of physics, who was standing by his word to be unavailable.

The prize had been expected ever since physicists working at the Large Hadron Collider announced on July 4, 2012 that they had discovered a particle matching the description of the Higgs, setting off headlines and sending Champagne fountains flowing around the world. Thousands of particle physicists worked on the project, and for many of them the Nobel is a crowning validation.

The Higgs was the last missing ingredient of that theory, a suite of equations that has ruled particle physics for the last half century, explaining everything from the smell of a rose to the ping when your computer boots up. According to this model, the universe brims with energy that acts like a cosmic molasses, imbuing the particles that move through it with mass, the way a bill moving through Congress attracts riders and amendments, becoming more and more ponderous and controversial.

Without the Higgs field, all elementary particles would be massless and would zip around at the speed of light. There would be no atoms and no us.

As Dr. Higgs once told The Guardian newspaper, “It has consequences. If it wasn’t there, we wouldn’t be here.”

There is small degree of controversy in the award, apparently. In addition to Drs. Higgs and Englert, there were others involved in the theoretical work that led to the Higgs Boson, including one man who worked closely with Dr. Englert but passed away some years ago, and a third group of three physicists. The Nobel Committee, though, does not award prizes posthumously and, at least in the field of physics, does not permit the award to go to more than three people for a single prize. Many in the theoretical physics world have expressed disappointment that the committee did not consider awarding the world of all six men.