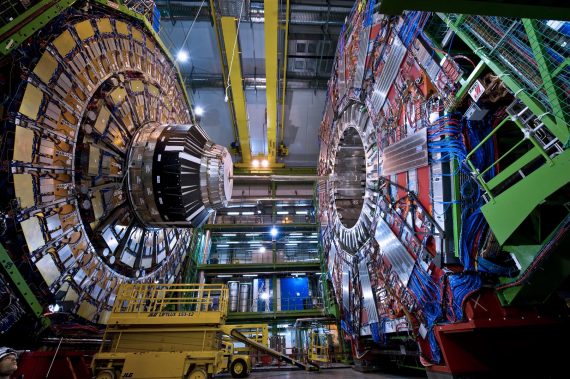 I’ve noted here before the efforts of the scientists working at the Large Hadron Collider to confirm the existence of the Higgs Boson, the so-called “God Particle,” in posts here and here. Now, it appears that we may be days away from if not a definitive announcement of discovery, at least something very close to it:

Like Moses seeing the Promised Land but not being able to go there, Fermilab physicists said Monday that its Tevatron, now shuttered but once the world’s most powerful physics machine, had fallen just short of finding a long-hypothesized particle.

Known as the Higgs boson, it explains why things in the universe have mass, and is a cornerstone of modern physics despite never being seen.

The news from the Fermi National Accelerator Laboratory added more buzz and hype about the long-sought particle as physicists and many others are standing by for an announcement on Wednesday from CERN, the European Organization for Nuclear Research, home of the Large Hadron Collider, which supplanted the Tevatron as the big horse in physics, and whose physicists might be on the verge of announcing that they have actually found the Higgs boson.

On Monday, Fermilab, in Batavia, Ill., said its results were the best “indication” so far that the legendary particle exists.

In what amounts to a last hurrah for the Tevatron, Fermilab physicists said that when they combined the data from some 500 trillion collisions of protons and antiprotons recorded since 2001 there was a suspicious excess, a broad bump in the mass range between 115 billion electron volts and 135 billion electron volts, in the units physicists use to measure mass and energy.

The new analysis confirmed an earlier one reported last March.

The odds that the Fermilab bump were due to chance were only one in 550, they said. “This is very, very low number for all practical reasons, so I have strong confidence that beautiful theory developed by theorists almost 50 years ago is indeed how the Nature works,” wrote a Fermilab physicist, Dmitri Denisov.

Unfortunately, that is just shy of the one part in 3,000, or “3-sigma” in physics jargon, that is required to use the word “evidence,” let alone “discover,” leaving the Tevatron unable to settle the question of the elusive boson.

Instead the stage has been cleared for CERN. The discovery of a new fundamental constituent of nature, as the Higgs would be, is a once-in-a-generation event and the imminent discovery of the Higgs at CERN, outside Geneva, has thrown physicists into a frenzy of rumor and speculation. The five living founders of the Higgs theory have been invited to a news conference there, heightening expectations that something big is in the offing.

So we’ll have to wait until Wednesday to see what the big news is, and while it likely won’t be a formal announcement that they’ve confirmed the existence of the Higgs Boson it would seem that they’ll at least be able to say that they’ve found significant evidence pointing to its existence. The next steps will be up to future discovery, and future tests at the LHC and other locations. Nonetheless, a step closer to confirming the existence of this particle will be a significant step in confirming that particle physics is, at the very least, moving in the right direction.

All of this reminds me of something, though, do you all remember when there were people saying that turning on the Large Hadron Collider would lead to the end of the universe? How did that ever work out?

Large Hadron Collider Will Switch On Tomorrow; World Will Be Fine