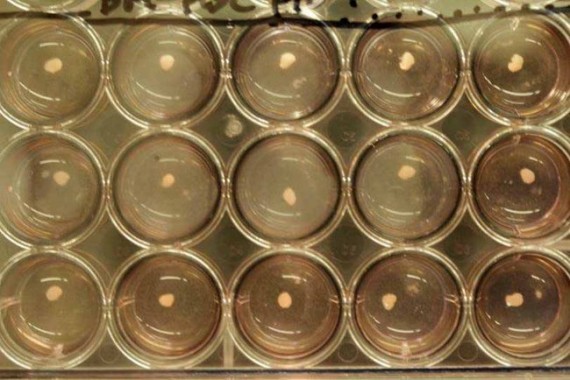 Scientists have apparently succeeded in using stem cells to create what could one day become the seeds of replacement livers for human beings:

Researchers in Japan have used human stem cells to create tiny human livers like those that arise early in fetal life. When the scientists transplanted the rudimentary livers into mice, the little organs grew, made human liver proteins, and metabolized drugs as human livers do.

They and others caution that these are early days and this is still very much basic research. The liver buds, as they are called, did not turn into complete livers, and the method would have to be scaled up enormously to make enough replacement liver buds to treat a patient. Even then, the investigators say, they expect to replace only 30 percent of a patient’s liver. What they are making is more like a patch than a full liver.

But the promise, in a field that has seen a great deal of dashed hopes, is immense, medical experts said.

“This is a major breakthrough of monumental significance,” said Dr. Hillel Tobias, director of transplantation at the New York University School of Medicine. Dr. Tobias is chairman of the American Liver Foundation’s national medical advisory committee.

The study was published on Wednesday in the journal Nature.

Although human studies are years away, said Dr. Leonard Zon, director of the stem cell research program at Boston Children’s Hospital, this, to his knowledge, is the first time anyone has used human stem cells, created from human skin cells, to make a functioning solid organ, like a liver, as opposed to bone marrow, a jellylike organ.

There are many years of testing and research ahead, but the implications of this ought to be rather obvious. The idea of being able to treat organ damage genetically has been a dream ever since stem cells were first discovered. Now, we’re one step closer to that day.