Rep. William Jefferson commandered a National Guard detachment on September 2, during the height of the Katrina rescue operations, to go check on his own home and retrieve his belongings. Ultimately, several soldiers, a helicopter, and at least two large trucks were involved in the operation.

A Louisiana congressman being escorted by National Guard troops removed personal items from his home in flooded New Orleans while military helicopters and emergency workers raced to save thousands of victims. Rep. William Jefferson, D-La., said he had planned to check on his house Sept. 2 after traveling with President Bush to survey the damage across the Gulf Coast. He said he accepted the Louisiana National Guard escort only after his staff and Capitol police warned him it was unsafe to travel alone because of looting and lawlessness.

After touring the flood-damaged city from the air and visiting evacuees at the Louisiana Superdome and the city’s Convention Center, Jefferson said he asked his National Guard escorts to drive him to his Uptown neighborhood, several miles from the Superdome. “I was intending to go to my neighborhood for sure if I could get there. I didn’t know what the condition was,” Jefferson said Wednesday. “I was curious to know and everybody in my family was curious to know: What was the condition of our house? Was it underwater? Was it looted?”

While Jefferson was checking out his house, the military truck that brought him there got stuck in the mud and a second truck had to be sent to rescue the congressman and his National Guard escort, said Maj. Ed Bush, a spokesman for the Louisiana National Guard.

A Coast Guard helicopter rescuing people stranded on rooftops also spotted the group at the congressman’s house and sent a rescue swimmer down to investigate. Jefferson said he and the guardsmen tried to wave the helicopter off, but the pilot apparently didn’t see him and the swimmer ended up kicking in a door and entering his house through a balcony.

Cmdr. Brendan McPherson, a spokesman for the Coast Guard, said the helicopter pilot responded to a distress signal from the National Guardsmen outside Jefferson’s house before lowering the rescue swimmer. At the time, water was waist-deep around the house and the guardsmen were standing on the front porch. “It was clear to them that they were being signaled, as they had been in many other cases when someone was in distress,” McPherson said. An Air National Guardsman who had hitched a ride on the truck carrying Jefferson from the Superdome was airlifted from Jefferson’s home by the helicopter, McPherson said, but Jefferson declined the Coast Guard offer of help. Three other people also were rescued from the congressman’s neighborhood before the helicopter returned to Mobile, Ala., he said.

Lt. Col. Pete Schneider, a Louisiana Guard spokesman, said Jefferson was the only official who requested a tour of the city via ground transportation.

Jefferson has, however, devoted the entire front page of his House website to information on Katrina relief. 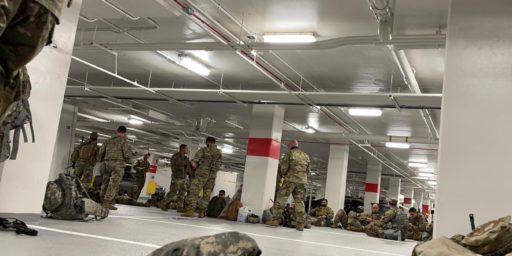 National Guard Sleeping in a Garage!