Americans who earn a lot of money disproportionately live in a tiny number of states and are married to other high-earners.

Dylan Matthews pulls these data from the Census Bureau:

About 3.96 percent of American households make over $200,000 a year. Thirty-eight states have lower percentages than that, and twelve and the District of Columbia have higher ones. Seven states have a percentage of less than 2 percent (West Virginia is lowest with 1.36 percent), 21 have a percentage between 2 and 3 percent, 11 have one between 3 and 4 percent, and four have one between 4 and 5 percent. New York and Virginia are both at about 5.6 percent, and California and Massachusetts are around 6.2 percent. Maryland is at 6.8 percent, New Jersey at 7.46 percent, Connecticut at 7.95 percent, and D.C. tops the list with 8.37 percent.

My first instinct was to notice that, not only was the tiny city that houses the seat of government easily the place with the highest concentration of high earners but that its suburbs and exurbs managed to bring Virginia and Maryland up nicely as well.

But Reihan Salam notes that looking at “households” obscures some important demographic trends.  He cites a three-year-old piece from Scott Hodge at the Tax Foundation: 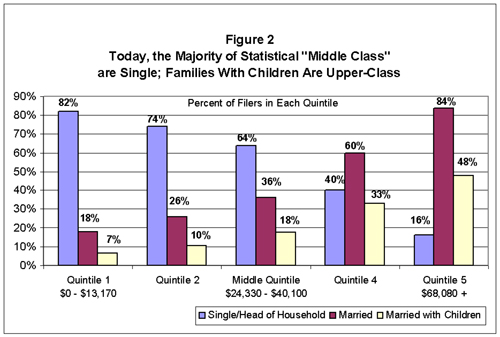 (1) There are vastly more single taxpayers than ever before and they comprise the majority of the populations of the first three quintiles.

(2) Because of the rise in dual-earner families, married couples are mostly found in the two highest quintiles.

(3) A greater percentage of taxpayers in the top two quintiles are married couples without dependents; no doubt many are “empty-nest” Baby Boomers nearing their peak earning years.

These demographic shifts have no doubt contributed to the perception of rising income inequality. When the so-called rich are increasingly couples with two incomes, they will naturally look wealthier than the vast number of single taxpayers who now populate the statistical middle.

The $200,000 plus set is disproportionately composed of dual-earner families living in high cost metropolitan areas. Assortative mating plays a crucial role as well: in the age of consumption complementarity, high-earners are more likely to marry other high-earners.

That’s doubtless correct.   The bulk of the highest paying jobs are in a handful of metropolitan areas, those who have them are likely to be married, and they’re likely to be be partnered with other high-earners.

Regardless, all of this shows how complicated gauging relative wealth is when dealing with a diverse, continental country.  We have not only very different costs of living and rates of taxation but also very different economies and cultures.   And compounding this by looking at “households,” and thus comparing dual earners with single earners, only further obscures the issue.