Sharron Angle: America is Violating the First Commandment (and No, I Didn’t Mean Amendment).

Sharron Angle has moved on from Second Amendment solutions to First Commandment ones...

Said Angle in an interview (as transcribed by the Las Vegas Sun’s Jon Ralston):

And that’s really what’s happening in this country is a violation of the First Commandment. We have become a country entrenched in idolatry, and that idolatry is the dependency upon our government. We’re supposed to depend upon God for our protection and our provision and for our daily bread, not for our government

Having spent most of life in evangelical circles, I am quite familiar with the language deployed here wherein anything not focused on God can be construed as idolatry.   Still, this is a pretty extreme version, especially in the context of practical politics.  Taken to its logical conclusion this means that we don’t need roads, schools, police, or the military after all, let alone welfare programs.

I especially find it to be rather intriguing formulation given that earlier in the interview she stated:

we need a true, battle-tested, proven, Constitutional conservative to take out Harry Reid

Last time I checked, a “Constitutional conservative” has to govern within the framework of the First Amendment, rather than First Commandment.

For those who are wondering, here’s the First Commandment(Exodus 20:3-6)::

3″You shall have no other gods before me.

4 “You shall not make for yourself an idol in the form of anything in heaven above or on the earth beneath or in the waters below. 5 You shall not bow down to them or worship them; for I, the LORD your God, am a jealous God, punishing the children for the sin of the fathers to the third and fourth generation of those who hate me, 6 but showing love to a thousand {generations} of those who love me and keep my commandments.

Congress shall make no law respecting an establishment of religion, or prohibiting the free exercise thereof; or abridging the freedom of speech, or of the press; or the right of the people peaceably to assemble, and to petition the government for a redress of grievances.

Unfortunately, at least from Angle’s POV, the whole prohibition on the establishment of religion things makes the whole First Commandment thing decidedly not the job of a US Senator. 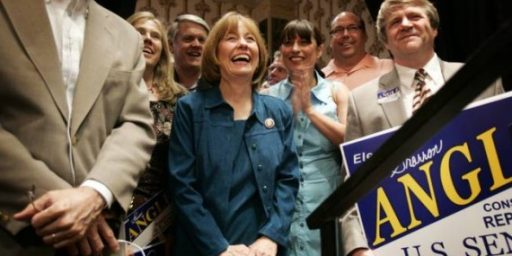