James Fallows prints a reader email noting that, while former Army Chief of Staff Eric Shinseki has won grudging admiration for his testimony before Congress saying we needed vastly more troops for the occupation of Iraq than Don Rumsfeld and company were planning for, many are still quite bitter about his other legacy.

Shinseki is apparently the genius who decided that we should all wear the beret (which is useless as it provides no shade or or rain or wind protection, and particularly nasty because it takes two hands to put on right, and weighs a ton when wet) as part of our regular uniform in garrison. For that, well, I resent the dude a little as do I think most soldiers.

The main objection to the beret wasn’t its impracticality, much less its negligible weight, but rather that it took a headgear previously reserved for elite forces and gave it to everyone.  Indeed, that was the whole idea: “All soldiers are elite.”  While well intentioned, it’s absurd and insulting.

Shinseki decided to give everyone in the Army a black beret, thus alienating the Rangers and everyone who supported their cause.  Why not some other color?  Because black went well with all of the Army’s uniforms at the time (both woodland and desert camoflague BDUs, the Army Green service uniform, and the Army Blue dress uniform and variants).  The Rangers, after a brief stink, decided to switch to tan berets so that they could be distinct again.

The black beret remains, though, as an Army abomination.  Berets, frankly, simply look silly unless the wearer takes pride in shaping it properly (this involves either cutting out the liner and carefully cultivating the desired look or forking over the money to buy one from Ranger Joe’s or a similar non-issue supplier), is quite fit, and has a very short haircut.   That is, the sort of people who wore a beret in the pre-Shinseki era.  It looks absolutely ridiculous when worn atop thick hair and in its original shape.

None of this, it should be noted, has much of anything to do with Shinseki’s qualification to run the Department of Veterans Affairs.  Presumably, someone will overrule him if he decides to open the doors to non-veterans under the theory that “we’re all veterans.” 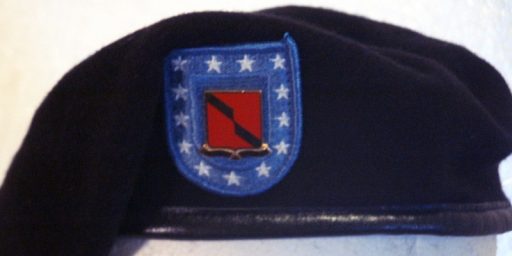