For a small group of people---perhaps just 1% to 3% of the population---sleep is a waste of time.

Christopher Doyle passed along an interesting article earlier in the week but I’m just now getting to posting about it–ironically, partly because I’ve been sleep deprived much of the week. 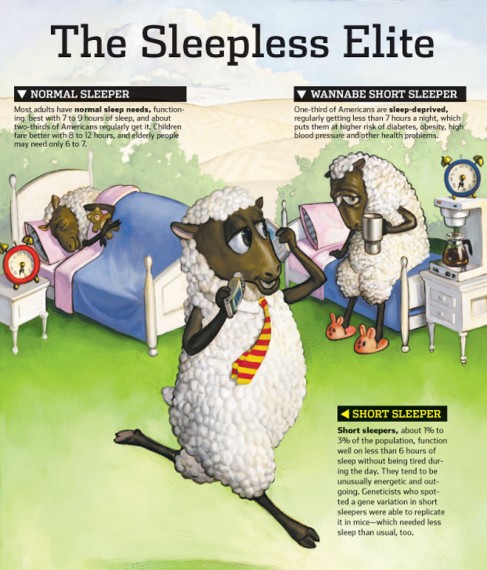 WSJ (“The Sleepless Elite–Why Some People Can Run on Little Sleep and Get So Much Done“):

For a small group of people—perhaps just 1% to 3% of the population—sleep is a waste of time.

Natural “short sleepers,” as they’re officially known, are night owls and early birds simultaneously. They typically turn in well after midnight, then get up just a few hours later and barrel through the day without needing to take naps or load up on caffeine.

They are also energetic, outgoing, optimistic and ambitious, according to the few researchers who have studied them. The pattern sometimes starts in childhood and often runs in families.

While it’s unclear if all short sleepers are high achievers, they do have more time in the day to do things, and keep finding more interesting things to do than sleep, often doing several things at once.

Nobody knows how many natural short sleepers are out there. “There aren’t nearly as many as there are people who think they’re short sleepers,” says Daniel J. Buysse, a psychiatrist at the University of Pittsburgh Medical Center and a past president of the American Academy of Sleep Medicine, a professional group.

Out of every 100 people who believe they only need five or six hours of sleep a night, only about five people really do, Dr. Buysse says. The rest end up chronically sleep deprived, part of the one-third of U.S. adults who get less than the recommended seven hours of sleep per night, according to a report last month by the Centers for Disease Control and Prevention.

A few studies have suggested that some short sleepers may have hypomania, a mild form of mania with racing thoughts and few inhibitions. “These people talk fast. They never stop. They’re always on the up side of life,” says Dr. Buysse. He was one of the authors of a 2001 study that had 12 confirmed short sleepers and 12 control subjects keep diaries and complete numerous questionnaires about their work, sleep and living habits.One survey dubbed “Attitude for Life” that was actually a test for hypomania. The natural short sleepers scored twice as high as the controls.

To date, Dr. Jones says he has identified only about 20 true short sleepers, and he says they share some fascinating characteristics. Not only are their circadian rhythms different from most people, so are their moods (very upbeat) and their metabolism (they’re thinner than average, even though sleep deprivation usually raises the risk of obesity). They also seem to have a high tolerance for physical pain and psychological setbacks. “They encounter obstacles, they just pick themselves up and try again,” Dr. Jones says.

I’m a natural morning person and get by on less sleep than average. But, absent an adrenaline surge brought on by a deadline, I’m typically not very productive much past 3 in the afternoon. I can keep working and sometimes get things done, but my peak writing and analytical work usually takes place between 7 in the morning and 2 in the afternoon (which makes me very cranky when meetings and other non-writing activities infringe on that time).

I’m usually very productive on six hours or so a night. But any significant interruption of my REM sleep can–and frequently does–ruin my whole work day, reducing me to staring at the computer and getting very little done.

Too Much, Too Little Sleep Bad for You